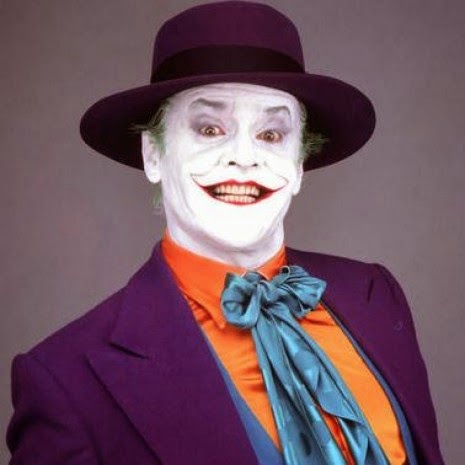 Advice in writerly blogs goes in cycles. Lately, several posts discussed villains/antagonists with the usual admonition to not make your villain a stereotype and humanize him/her. After all, even Hitler loved his dog. 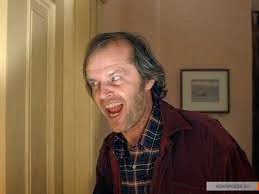 The Joker need not apply; but Jack Torrance, come on down.

It's good advice. Notice how whenever someone commits some atrocity and the neighbors are interviewed, they mostly say how ordinary the person was. How they would NEVER have guessed. Not in a million years.

I am one of those neighbors. I dated the brother of a serial killer, last estimated body count was up to 60. Disclosure: he was a serial killer in training when I dated his brother, but I also had contact with him years after his brother and I stopped dating.

If someone had asked me about him, I would have said he was a really nice, polite, young man. Good looking. Smart. Thoughtful, even.

He attended the college where I worked as an administrator. Since we were acquainted, he occasionally stopped by my office and chatted for a few moments. Nothing earthshaking. Hi! How's it going? Read any good books? Heard from your brother lately? He sometimes brought me a donut and a cup of coffee. Thoughtful, right? I sure thought so.

Later, when someone told me what had become of him and gave me the book about him, I learned one of his first attempts at poisoning was when he worked as a med tech. He often brought in donuts for his co-workers, and those donuts were laced with arsenic.

Do I think he tried to poison me? No, I never had any symptoms of poisoning. Although, for all I know, he might have been testing how readily someone accepts food from an acquaintance. Because that's all we ever were. Acquaintances. In retrospect, our interactions probably would have been a moment of high drama/tension in a movie. It still sends shivers up and down my spine when I think about it.

So, for me a very ordinary act takes on a level of horror that I never imagined. It's very human horror that has nothing to do with supernatural powers, drooling and cackling, or overt acts of evil. If I ever get around to writing my Wiccan mystery novels, I know where to look for my villain.

Posted by Michalea at 2:13 PM No comments:

What drew me to this photo? 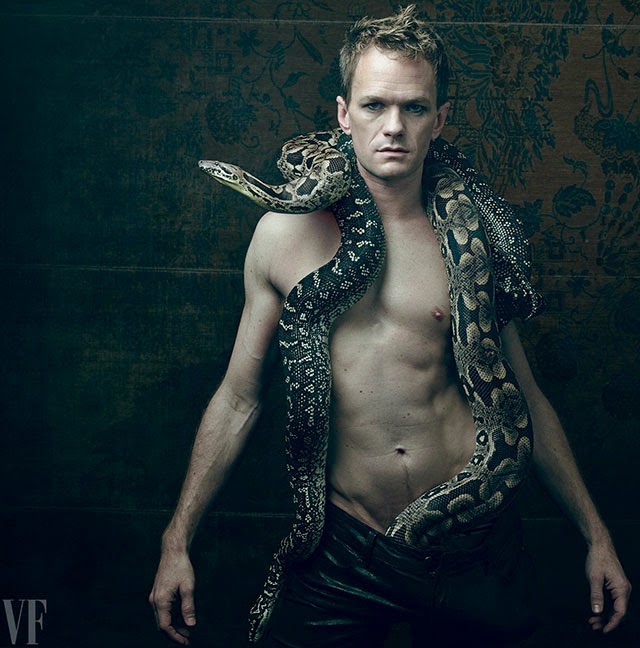 Neil Patrick Harris with a Dumeril’s boa and a diamond python, photographed by Annie Leibovitzat at the Chateau Marmont in West Hollywood

Then, it occured to me that I wrote the following opening for a scene in Queen of Heka a few weeks before I saw this photo, and it was eerily similar.


Dawn painted the fields with a splashes of green and gold. The hum of insects and the flow of the rain-swollen river filled the air. A man wearing nothing but a loin cloth and gold belt stood directly across the river from where I sat beneath a tree. His face was turned from me and the rising sun.

He lifted his arms like a priest summoning the gods. The river turned to sludge, and the breeze reeked of an open grave. Birds, feeding on small insects in a nearby stand of papyrus, took wing. In a heartbeat, they were a distant gray wedge on the horizon, a ghostly chorus of rustling feathers.

The man turned and slithered toward me. A crimson birthmark coiled around his body from knee to hip bone. As he came closer, I realized the birthmark was actually a cobra carved and painted into his finely scaled flesh. The cobra’s flaring head, fangs bared and ready to strike, nestled in the hollow of his belly. The man’s yellow eyes fixed on me, and my thoughts went muddy and slow. The next thing I knew, he was right in front of me, his toes touching mine. I scrambled to my feet and laced my fingers together to conceal their trembling.

“Isssset wer-Heka, I have long wanted to meet you.” His blue tinged lips scraped back over his teeth into a smile. He extended his palm, open like a trap.

I didn’t take it. “You have the advantage, my lord. I don’t have the pleasure of knowing of you.”

His shoulder brushed mine, but I never saw him move forward. Heat radiated from his skin. The leaves of a nearby sycamore shriveled.
Posted by Michalea at 5:56 PM 1 comment:

Bumper stickers for books. . . or fans in unlikely places

First, ignore the dirty car and concentrate on the bumper stickers. 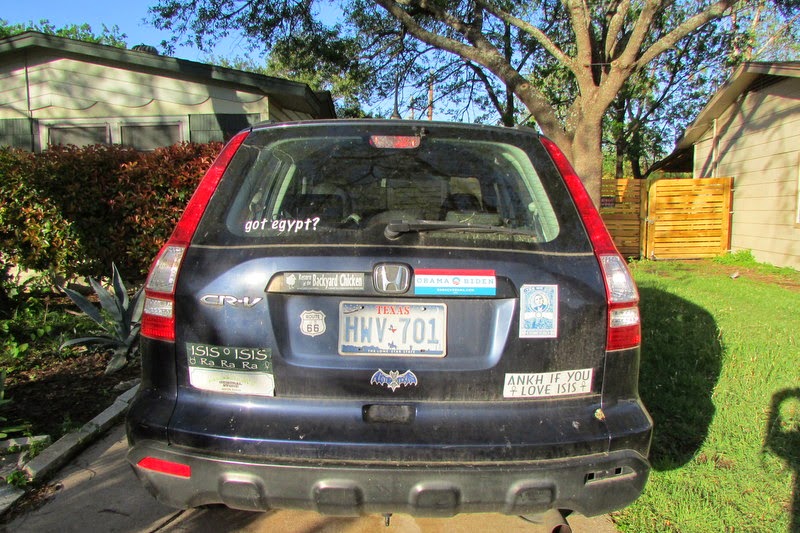 Now, picture this: I'm in one of those endless three-lane queues at the airport to pick up my daughter. A woman snakes forward beside me and starts gesturing wildly for me to roll down my window. I'm a little nervous as airport queues can turn nasty in a heartbeat, but I do it.

She leans across the passenger seat and shouts, "I LOVE those Isis bumper stickers. What do you know about Isis?"

We're standing dead still, so I holler back, "A lot. I'm writing a novel about her."

Me (sadly): "Still in progress, but there's a sample chapter on my website."

She pulls out a pen and piece of paper writes down the title of my book (Queen of Heka) and my website  (michalea.com).

Will she actually follow up? Who knows? Still, it made my day. It also made me think I must invest in book bumper stickers when the time comes. Maybe bumper stickers will place the ubitiquous bookmarks that used to be so popular at book signings. Who needs a bookmark for their Kindle?

This lovely banner from Titan Publishing / Titan InKorp looks like the perfect bumper sticker for me. 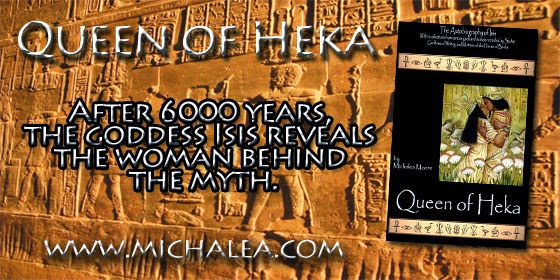 Disclosure: This is not the first time my bumper stickers have generated a discussion. It is the first time  someone asked for information while the car was still moving (moving in theory, anyway).
Posted by Michalea at 8:53 AM 2 comments:

Searching for a synopsis. . .a short survey 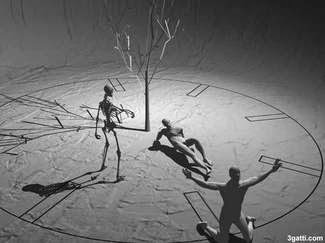 Figuring out the synopsis is somewhat like Waiting for Godot, an absurdist play by Samuel Beckett, in which two characters wait endlessly and in vain for the arrival of someone named Godot. As Becket himself famously said about the meaning of the play, "It is a game; everything is a game."

Naturally, everyone in this game has an opinion on a synopsis. Don't believe me? Just fire up the Google, type synopsis, get out the popcorn, and start reading.


You can see where I'm getting the Waiting for Godot theme, right?

The one thing everyone agrees on (well, everyone but the very important agent) is that this thing is what entices people to want to read more of your book.

So with that in mind, I used a  couple of the standard templates for synopses and created a few of my own for Queen of Heka.

Which of these would make you want to read more? 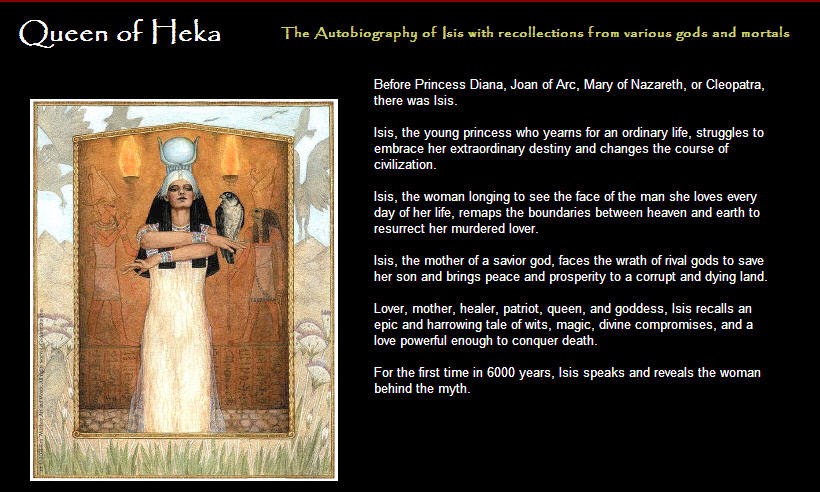