Stick gods is such a clever cartoon series. 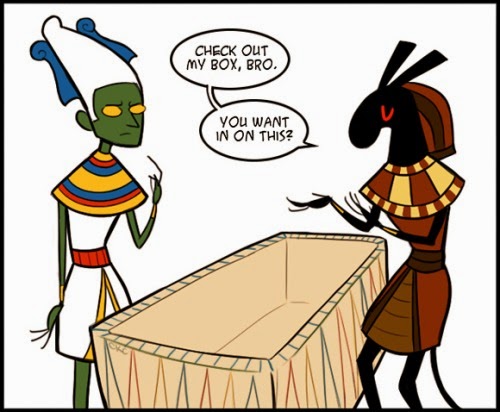 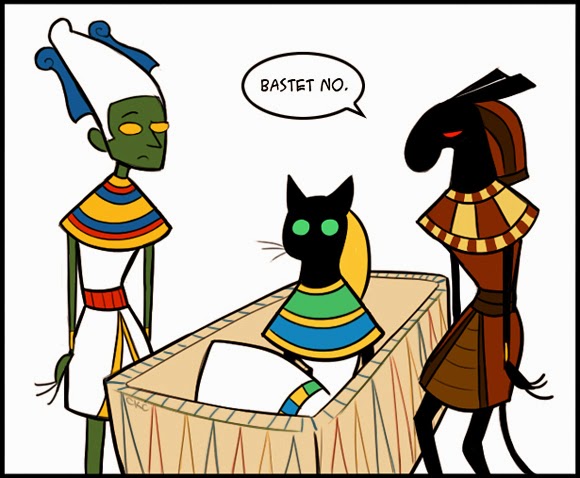 Posted by Michalea at 7:11 AM No comments:

The many faces of Isis, her prayers, and two videos

How the ancient Egyptians saw Isis. 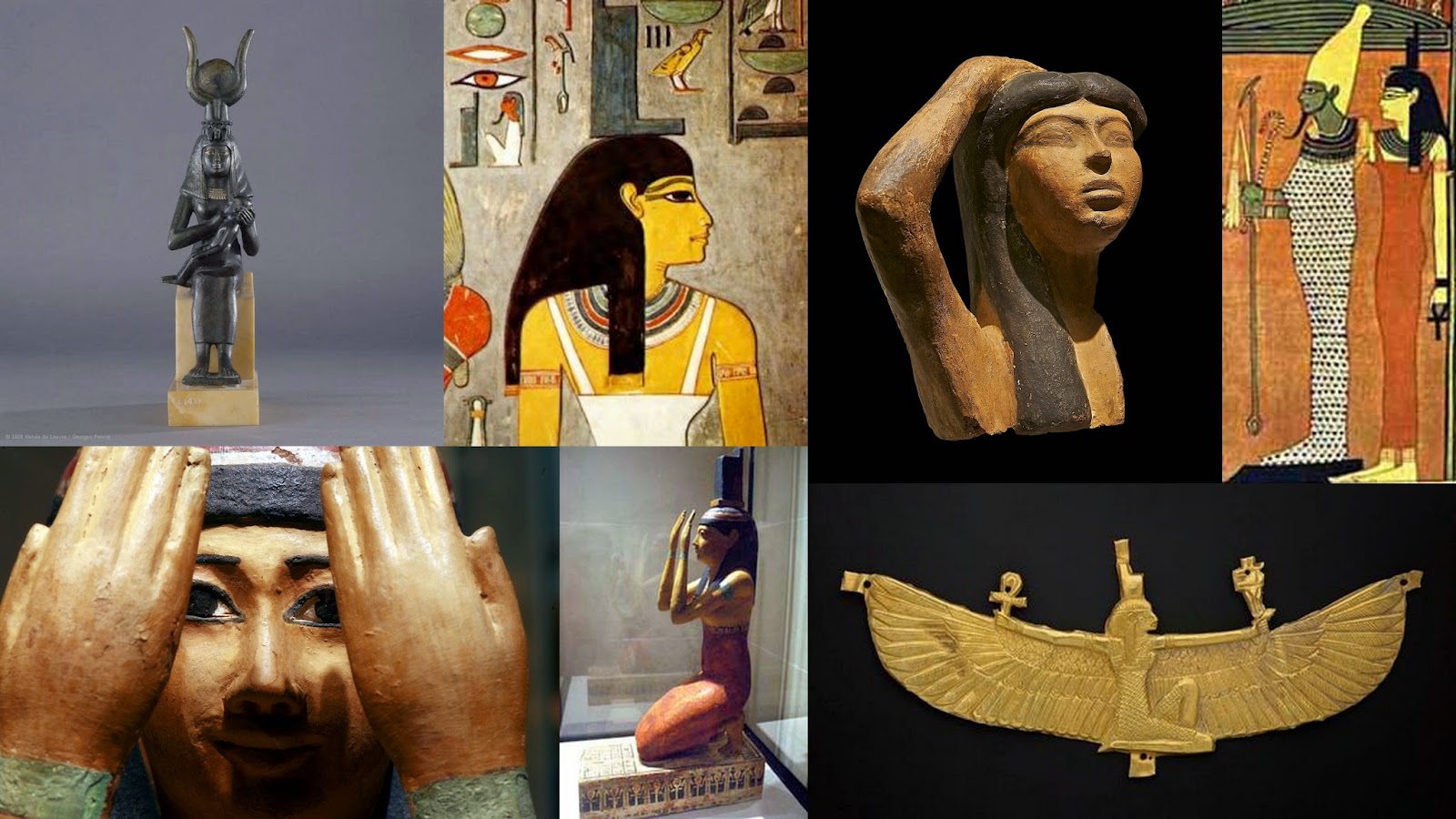 Isis is the Greek version of the name Ast, Aset, Auset, or Iset. I chose to use Iset for my novel.

Isis was worshipped as the ideal mother (of Horus) and wife (of Osiris) as well as the patroness of nature and magic. She was the friend of slaves, sinners, artisans and the downtrodden, but she also listened to the prayers of the wealthy, maidens, aristocrats and rulers. She is also known as protector of the dead and goddess of children.

The name Isis means "Throne" Her headdress is a throne. As the personification of the throne, she was an important representation of the pharaoh's power. The pharaoh was depicted as her child, who sat on the throne she provided.

Isis was arguably the most popular of the many Egyptian goddesses. From ancient Egypt, her worship spread throughout Greco-Roman world and continues today through various pagan groups and the Fellowship of Isis, which literally thousands of members and a cool castle She is one of the longest continuously worshipped deities in human history, approximately 4500 years if you calculate from the first mention of worship.


Hymns to Isis in Her Temple at Philae

Some video hymns to Isis

Classical, but not authentic.

Not classical, but  might be more to your liking :-)

Posted by Michalea at 9:15 AM No comments:

The many faces of and hymns to Osiris

How did the ancient Egyptians see Osiris?

My favorite images are in the upper right and lower left corners. Osiris awakening (lower left) has been my absolute favorite since seeing it  at The Quest for Immortality exhibit several years ago. There's something so mysteriously eternal in this representation of the King of Eternity. 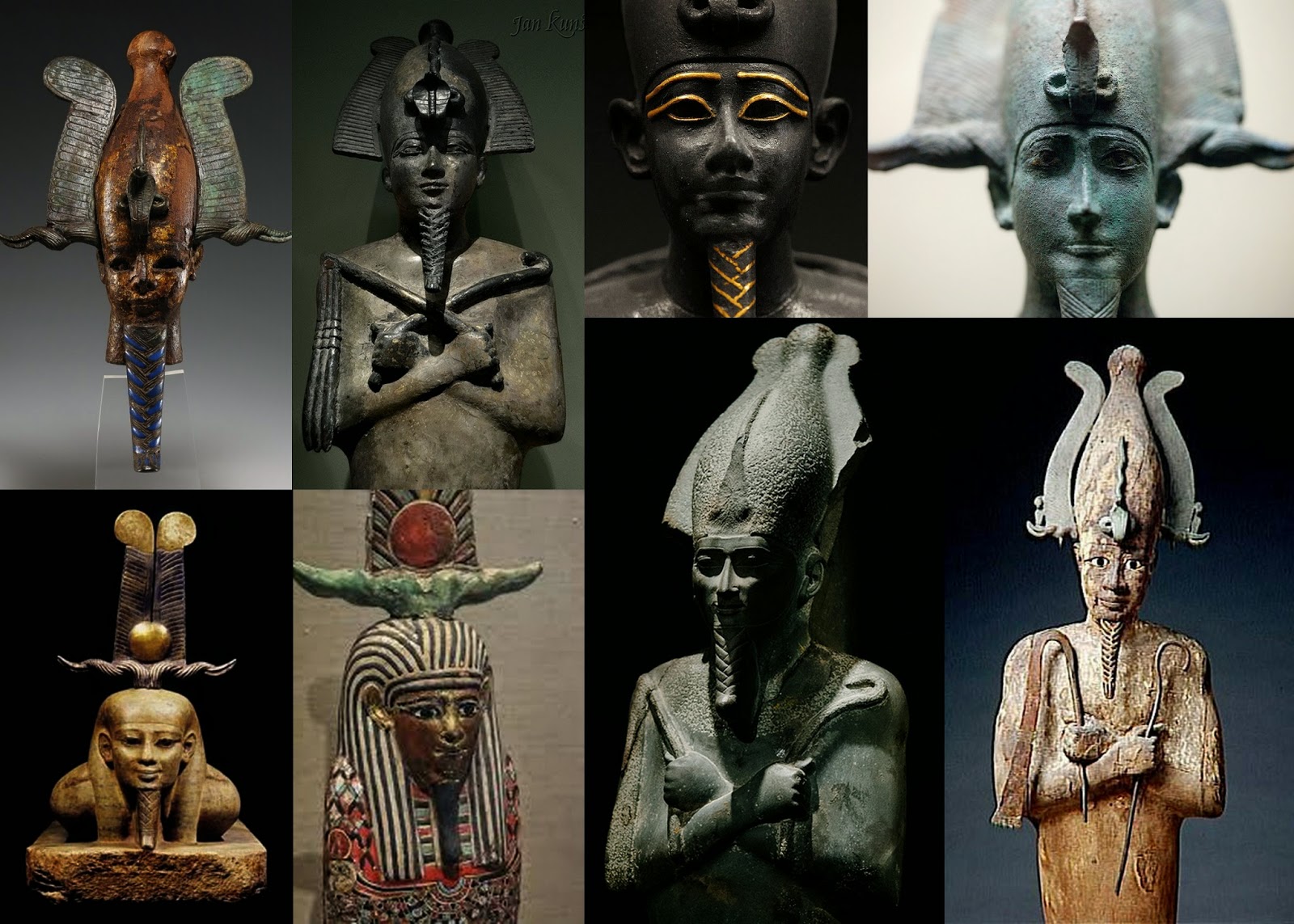 What did they say about him? Hmmm. Doesn't the second stanza sound familiar? Maybe Handel's Hallejuah chorus: King of Kings, Lord of Lords, He shall reign forever and ever.


A Hymn of Praise to Osiris Un-Nefer, the great god who dwelleth in Abtu, the king of eternity, the lord of everlastingness, who traverseth millions of years in his existence. Thou art the eldest son of the womb of Nut. Thou was begotten by Keb, the Erpat. Thou art the lord of the Urrt Crown. Thou art he whose White Crown is lofty. Thou art the King (Ati) of gods [and] men. Thou hast gained possession of the sceptre of rule, and the whip, and the rank and dignity of thy divine fathers. Thy heart is expanded with joy, O thou who art in the kingdom of the dead. Thy son Horus is firmly placed on thy throne. Thou hast ascended thy throne as the Lord of Tetu, and as the Heq who dwelleth in Abydos. Thou makest the Two Lands to flourish through Truth-speaking, in the presence of him who is the Lord to the Uttermost Limit. Thou drawest on that which hath not yet come into being in thy name of "Ta-her-sta-nef." Thou governest the Two Lands by Maat in thy name of "Seker." Thy power is wide-spread, thou art he of whom the fear is great in thy name of "Usar" (or "Asar"). Thy existence endureth for an infinite number of double henti periods in thy name of "Un-Nefer."

Homage to thee, King of Kings, and Lord of Lords, and Prince of Princes. Thou hast ruled the Two Lands from the womb of the goddess Nut. Thou hast governed the Lands of Akert. Thy members are of silver-gold, thy head is of lapis-lazuli, and the crown of thy head is of turquoise. Thou art An of millions of years. Thy body is all pervading, O Beautiful Face in Ta-tchesert. Grant thou to me glory in heaven, and power upon earth, and truth-speaking in the Divine Underworld, and [the power to] sail down the river to Tetu in the form of a living Ba-soul, and [the power to] sail up the river to Abydos in the form of a Benu bird, and [the power to] pass in through and to pass out from, without obstruction, the doors of the lords of the Tuat. Let there be given unto me bread-cakes in the House of Refreshing, and sepulchral offerings of cakes and ale, and propitiatory offerings in Anu, and a permanent homestead in Sekhet-Aaru, with wheat and barley therein- to the Double of the Osiris, the scribe Ani.
Read more: http://www.touregypt.net/bod4.htm#ixzz3Okoc3ZYW

The following video isn't authentic exactly, but lovely to hear and watch. To learn more about it, see The Harp in Ancient Egypt by the composer.

Where, when, and why I'll be there: Writers' Conferences 2015 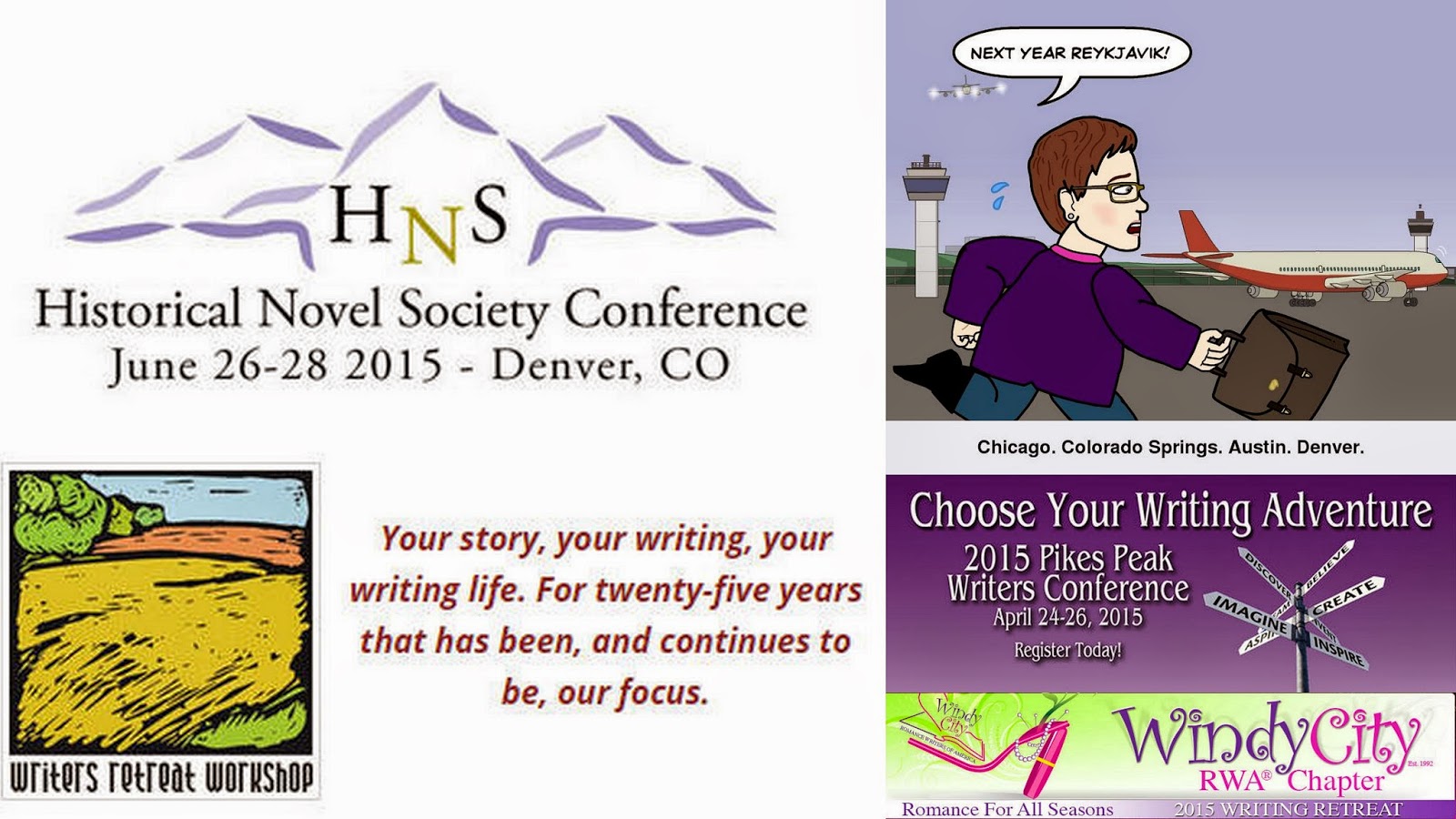 After all these years, I finally figured out that writers' conferences and retreats tend to be held in the first half of the year... with some notable exceptions. Usually, I start thinking about them in March when many are already full. In 2015, I had a plan and a partner in crime. . .er writing. . . to go with me.

Pause for shout-out to my good friend Ellan whom I met at the week-long  Writing the Breakout Novel in 2013. Since then, Ellan and I have attended a few writing conferences together. As a result, we became adept at the all-important wine in the bar, on the veranda, and in the dining room writing experience. This year, we're thinking of personalized name badges to sum up our "special" attributes. (Yep, I'm Ms. Short and Stocky Red Wine.)

BTW: If you haven't experienced a week of Writing the Breakout Novel with the phenomenal Don Maass, Lorin Oberweger, Brenda Windberg, and Jason Sitzes, you should. (There are other staff members, but they weren't at the retreat I attended.) Your writing will thank you.


Windy City Retreat 2015!
Where: Chicago, IL
When: March 13 -14
Why: Writing 21st Century Fiction, an 8-hour Master Class with Donald Maass. OK, three reasons. It's close. It's cheap. It's the Donald. I've had two sessions with him, the previously mentioned Writing the Breakout Novel and a three-day seminar in Austin, Tension on Every Page. I decided I needed a refresher, and this seemed just about perfect.

Choose your writing adventure Pikes Peak Writes Conference
Where: Colorado Springs, CO
When: April 24-26
Why: I'll just come right out and say it. Pikes Peak is my favorite writing conference. This will be the fifth or sixth time I've attended. The people are great. The presenters are always fascinating and provide timely information. Plus, it's one of the best organized conferences I've ever attended, and I've gone to a few. I've always appreciated how the presenters are put at various tables during meals, and the table has a placard telling which presenter is at that table. I soaked up words of wisdom from and chatted with Ann Bishop, Kevin Anderson, Margaret Coel, and Carol Berg. It's enough to make any fan girl's heart go pitty-pat.

This year, the standard pitch sessions have been upgraded to A Query 1-on-1 appointment, which is an 8-minute one-on-one meeting between you and an editor or agent, who will review your query letter and answer questions.

Where: Bandera, TX
When:  May 15-22
Why: So, if you look at the link, you'll think I'm shooting for an All Don/All the time experience in 2015.  Actually, I decided to sign up in 2014 before the Donald was announced. My amazing and mostly brilliant editor/coach Jason Sitzes is the workshop director. Although Jason might not agree, he kept me on track through 2014, and my writing has greatly improved. So if he thinks it's a good retreat for me, I'm all in. Plus, he thinks I'll learn a lot from Les Edgerton, who is an intriguing character to say the least. He might have been my dad, if my dad had been a writer instead of on the FBI's 10 most wanted list.

I plan to finish the final-ish edits for Queen of Heka by then and take a short break from the Isis story before I start on the second novel, Lord of the Horizon. So, keeping my fingers crossed I have enough done on Reeds of Time for a good first critique.

An added benefit, the workshop is near Austin. I'm going down a week early and will work from my son's office as well as visit kids, old friends, and professional colleagues.

Historical Novel Society Conference
This conference alternates between the US and England. (They just added an Australian component, too.) I've attended the US conference before, and I loved it. Next year, I REALLY want to go to the one in England. Or Australia.

Now, I say this with all possible respect and affection: this conference can be nerd central. Where else would I find a session like this? (Color me excited!)

Elizabeth Peters, Egyptology, and Historical Fiction Today
For the first half of our discussion, we will share information about the author Barbara Mertz (aka Elizabeth Peters), the field of Egyptology (and Mertz’s role in the field), and how the work of Barbara Mertz/Elizabeth Peters continues to influence contemporary writers of historical fiction.
Bill Cherf explains who Barbara Mertz was, sharing her education and dissertation subject, and her two popular histories. Bill explains how Mertz’s approach to Egyptology was unique and refreshing. Janis Susan Patterson discusses how Barbara Mertz “became” Elizabeth Peters, the pen name beloved by historical fiction and mystery readers around the world. How did this author leverage her considerable experience in Egyptology to become one of the best-known names in her secondary field, that of the novelist? Libbie Hawker shares how the influence of Mertz/Peters still impacts ancient Egyptian and archaeological fiction today—how this author paved the way for two flourishing subgenres that have consistently enthralled readers from the publication of Elizabeth Peters’s first novel through 2015 (and beyond!)

Along with the usual manuscript prep, social media, and getting an agent workshops, there are also sessions on using a broadsword, midwifery, and regency dancing for those who aspire to be historically accurate. (And really, you SHOULD strive to be somewhere in the vicinity of the historical accuracy ballpark. I won't go into my rant about Exodus: Gods and Kings again.)

Looking forward to 2016, I hope to go the Historical Novel Society Conference in England, the Iceland Writers Retreat in Reykjaik, and to a Break Out Novel Intensive. Money being what it is, I'll probably only make two of them at best. Decisions. Decisions.
Posted by Michalea at 12:44 PM No comments: