Dancing Antiquities
All myths and art stem from older works. When we trade, we also trade our culture, religion and ideas. From there we evolve even further. History is wondrous in motion, and dances with a life and vitality all its own.Music by Todd Michaelsen Photographed and animated by Nina Paley
Posted by Awake in our Mythology on Thursday, June 4, 2015

Posted by Michalea at 7:41 AM No comments: 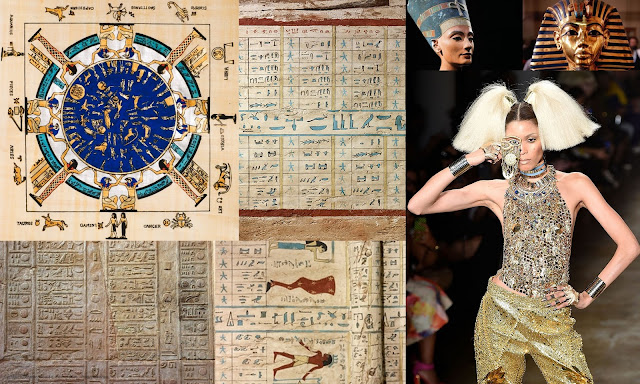 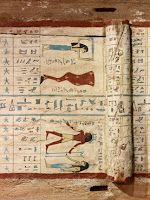 Planetarium software, among other things, shows how ancient Egyptians planned to navigate the sky after death

Ancient Egyptians expected to be very busy in the afterlife. Thousands of years ago they painted big beautiful eyes on the outside of their coffins so that they could see what was going on in the world. Some of the nobility around the upper Egyptian city of Asyut even had detailed tables of star movements drawn on the inside of their coffins. The depictions look like timetables or spreadsheets of when various stars first appear (or disappear) over the horizon at different times of the year—only a lot more beautiful.

If you want to go straight to the star charts, click here.

Over than 5000 years ago, the ancient Egyptians came up with their own calendar and months and it holds a lot of similarities to the way we perceive a typical year these days. The Ancient Egyptian calendar was originally based on twelve lunar months, grouped into three seasons of four months each to coincide with the rise and fall of the waters of the Nile.

Backstage Interview with the Blonds on Burial Practices and Show Girls

Their ancient Egypt-heavy spring collection was loaded with the kind of showiness for a woman who has come into her own with an assist from some sparkle. Think Cleopatra, gold lame, and cobras, and you’re in the right lane.

Visitors to the Egyptian Museum in Central Cairo do not have long to admire the renowned golden mask of boy king Tutankhamun, which will leave its display cabinet in October to undergo intensive restoration work after being accidentally damaged by museum officials in August 2014.

Field trip to search for Nefertiti's tomb to start

Archaeologist Nicholas Reeves is to arrive to Luxor, 28 September, in the hope of confirming his theory on the location of Nefertiti's final resting place in Tutankhamun's tomb.

Posted by Michalea at 8:35 AM No comments: 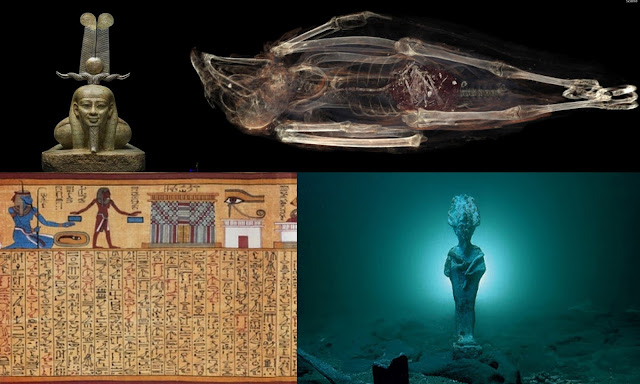 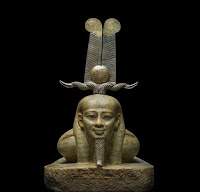 A landmark exhibition of over 250 antiquities, will open after the holiday season, from 8 September until 31 January at the Arab World Institute, Paris.

Do not miss the amazing multimedia demo about the exhibition here.

The oldest Egyptian leather manuscript has been found in the shelves of the Egyptian museum in Cairo, where it was stored and forgotten for more than 70 years.

Dating from the late Old Kingdom to the early Middle Kingdom (2300-2000 B.C.), the roll measures about 2.5 meters(8.2 feet) and is filled with texts and colorful drawings of the finest quality. Read more about it here.

Ancient Egyptians bred birds of prey for religious offerings to the gods, scientists have discovered. The use of 3D imaging of a mummified kestrel showed it died because of forced overeating, with the bird having choked to death on its last meal of a mouse.

Published in the Journal of Archaeological Science, the team from the American University in Cairo, Stellenbosch University and the Stellenbosch Institute for Advanced Studies said this is the first evidence to show ancient Egyptians mass bred birds of prey as offerings to gods. It is also thought these birds were used in falconry for hunting.

Other articles on this topic

Posted by Michalea at 6:43 AM No comments:

Return of the Goddess Video 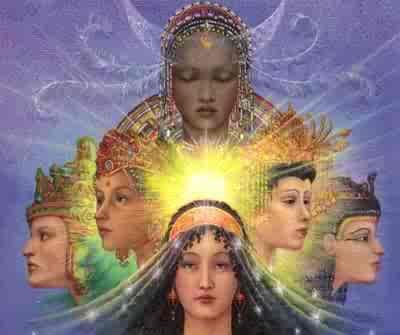 OMG. I love this, and so would Isis.


The Golden Calf (Return of the Goddess) from Nina Paley on Vimeo.

Posted by Michalea at 7:39 AM No comments:

Ancient Egypt this week wishes you a Happy Labor Day 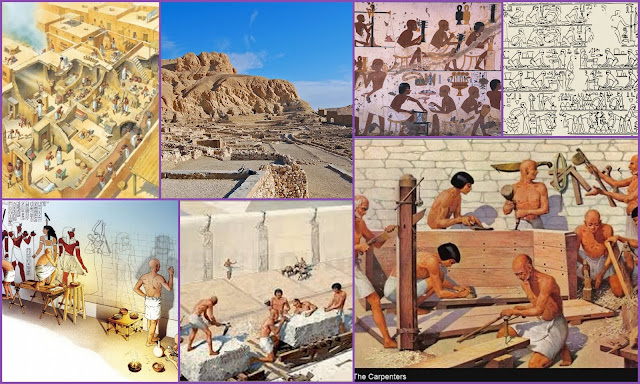 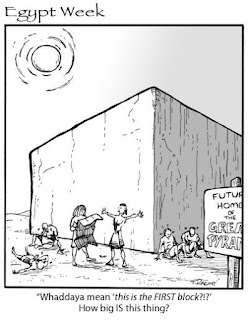 Labor Day is a holiday in the United States, and one most of us look forward to celebrating. (Who doesn't like a day off work?)

What was it like to be a working man or woman in ancient  Egypt?

Not as bad as some might expect. Some workers enjoyed health insurance, free food and lodging, and 2 days off every 10 days. In case you're wondering, a week in Ancient Egypt was 10 days long.

That whole slaves building the pyramid, yeah that's just a story. No Pharaoh was going to entrust his House of a Million Years to disgruntled slave labor. Still, working in Ancient Egypt was no cruise up the Nile either.

A look at some of the world's oldest professions. (No, not that one.)

Despite being at the bottom end of the hierarchy of Egyptian society, some workers prospered as a result of growing demand for skilled craftsmen. The records from a special village give us an insight into their lives.

Workers had a higher status than slaves, servants and peasants, but they were not as important as educated professionals such as scribes, doctors and accountants.

After the death of Ramses II, the workers even went on strike – the first recorded strike in history – because the government was running out of money and was unable to feed or pay them. 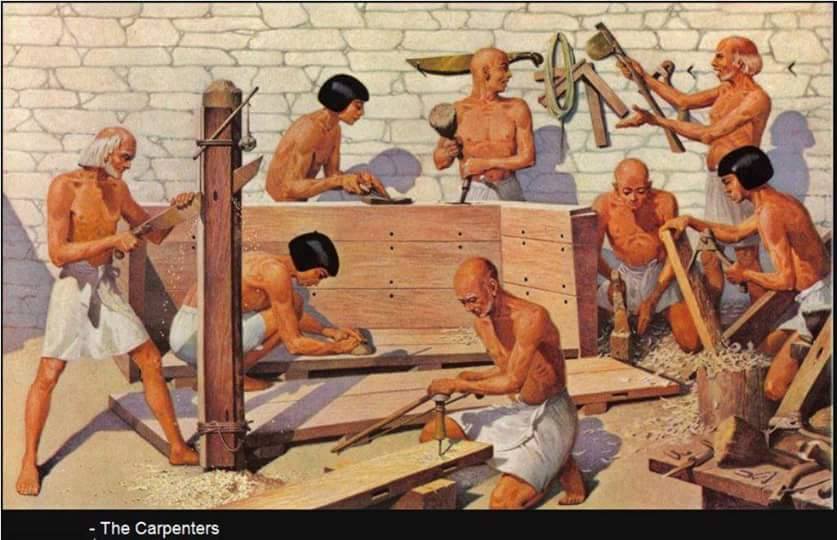 Not much has changed during the last few millennia.

Deir el-Medina is the name given to the ruins of an ancient Egyptian village that housed workers building tombs in the Valley of the Kings. Records from the site reveal an ancient economic development strategy. 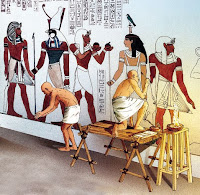 Over time, the farmers of ancient Egypt were able to produce more food than they needed just for themselves. This enabled some people to do types of work other than farming. Many of them set up workshops and became craftworkers. Often a son would learn his father’s craft and follow him into his workshop. Some craftworkers worked for the pharaoh or Egyptian nobles, to make items for their tombs or temples. Despite only having simple tools to work with, the craftworkers of ancient Egypt were highly skilled. There were stoneworkers, carpenters, potters, glassworkers, leatherworkers, spinners and weavers, metalworkers and jewellers. Read more for a glimpse at Deir-el Medina. 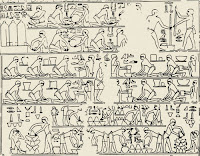 Hieroglyphic texts tell us that Old Kingdom food production and storage facilities fell under an institution called per shena (written with the house and plow signs, roughly translated to “house of the commissariat”). This term indicates a food production establishment that included bakeries, breweries, and granaries.

A slide presentation on working and life

Skilled craftsmen, on the other hand, worked year-round on their crafts. Some examples of skilled craftsmen in Egypt were sculptors, goldsmiths, painters, carpenters, and rock cutters.
Inherited Jobs: For the most part, whatever job your father had, you had. If he was a farmer, most probably, when you grew up, you would become a farmer. If he was a soldier, most probably, that was your future as well. In ancient Egypt, jobs were inherited.

Posted by Michalea at 9:43 PM No comments:

Ancient Egypt was a crazy place. 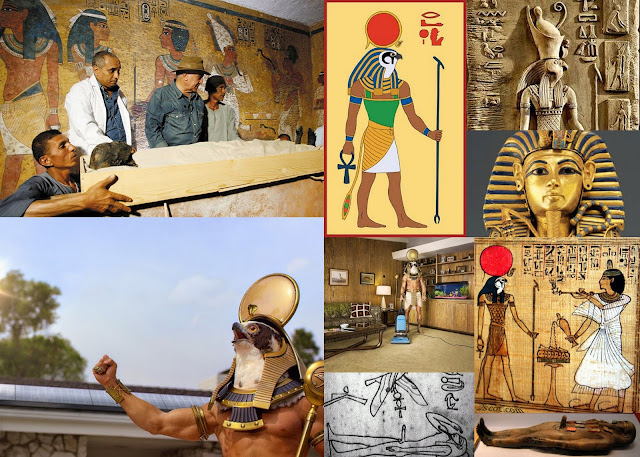 He's ancient Egypt's most famous pharaoh. The discovery of King Tut's treasure-filled tomb in 1922 made him an international sensation and a subject of continuing study and analysis.

Most recently, mummy expert Salima Ikram, an Egyptologist at the American University in Cairo, has suggested that the mortal remains of King Tutankhamun-including a symbolically erect phallus-may point to a struggle for the political soul of his country.

King Tut's mummy has many strange features that have often been explained as the results of his hurried burial after his untimely death around the age of 19. But Ikram now wonders if these oddities were deliberate attempts at making Tut look like Osiris, the god of the afterlife.

The Egyptian Sun God Ra Shines as a Pitchman for SolarCity

At Home with Ra: Horticulture

Posted by Michalea at 8:53 AM No comments: