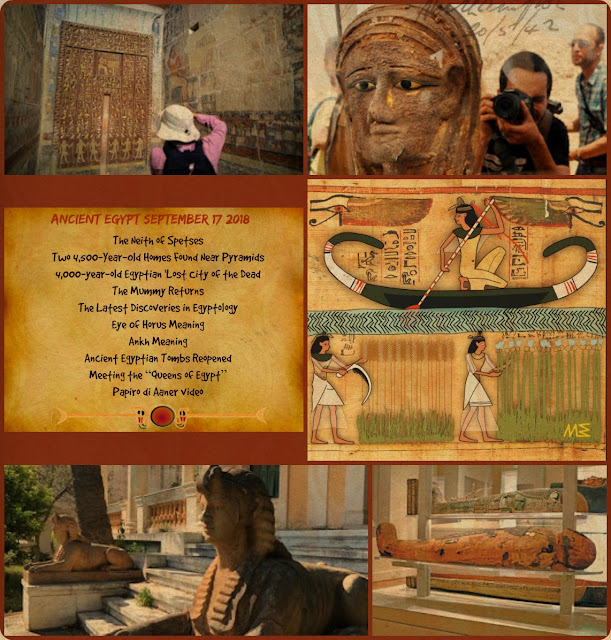 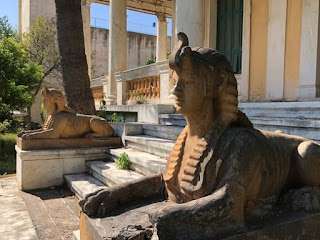 The Neith of Spetses

Anargyros was also fascinated with Egyptology, and in 1903 he began construction of a grand mansion decorated inside and out with Egyptian décor. Finished in 1904, Anargyros named it “Neith” after the Egyptian goddess of war and hunting. It immediately became the most imposing building in Spetses, hosting kings, queens, and other dignitaries of that time. These guests entered past one of the mansion’s most impressive features, the two large sphinxes flanking the entrance. 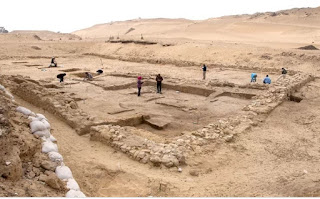 Archaeologists have discovered two ancient homes near the Giza pyramids in Egypt. The structures may have housed officials responsible for overseeing the production of food for a paramilitary force more than 4,500 years ago. 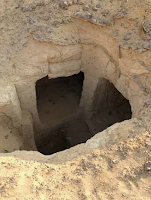 The site, near Al Ayyat, on the edge of the Sahara Desert had previously been left alone for about 4,000 years, until now.

Egyptologists believe it is one of the largest necropolis (city of the dead) dating back to the Middle Kingdom period of Egyptian history.

Inside the crypts there is enough space that experts believe it could have held thousands of corpses. 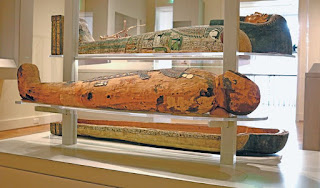 Everybody loves Nesmin. The RISD Museum staff all refer to Nesmin by name. They encourage visitors to see Nesmin, to spend a little time with him on the third floor. Nesmin is much beloved, especially for a guy who died 2,250 years ago.

The Ptolemaic mummy has been on display since 1938, a well-wrapped bundle of cloth covered in intricate painting. Yet after much discussion, the museum has decided to put Nesmin back in his ornate coffin, where he was originally ensconced in the third century B.C.E. 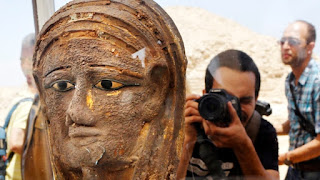 Every few months, the Nile Scribes bring you summaries of the latest news and discoveries in Egyptology, both from the field and the lab. We’ll introduce you to the newest archaeological finds or recently undusted manuscripts being rediscovered in museum collections, plus other new theories stirring in the Egyptological Zeitgeist. This summer has seen a wealth of new discoveries and research, with much excitement generated by the discovery of an intact, black sarcophagus in Alexandria. Another intriguing find was the identification of the world’s oldest cheese from the tomb of an Egyptian official at Saqqara. 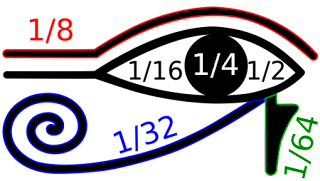 Eye Of Horus: Meaning Behind The Egyptian Eye
The fractions of the Eye of Horus. Image source: Wikipedia.

The Eye of Horus, also called the Egyptian Eye, the Wedjat, or the all-seeing eye, was a powerful symbol for the ancient Egyptians. The Eye was widely used in funeral rites and as protective amulets in ancient Egypt. Often made of gold, wood, carnelian, or lapis, the Eye of Horus was often worn as jewelry worn by both the living and the dead or as an amulet to be tucked between the folds of linen wrapped around mummified corpses.

This is an ancient symbol that originated in Egypt where it was used in portraits of gods, usually seen carried on each hand, on their chest or carried by the cross’s loop. The ankh is seen in the Egyptian pantheon either in close proximity or in the hand of most Pharaohs and deities. 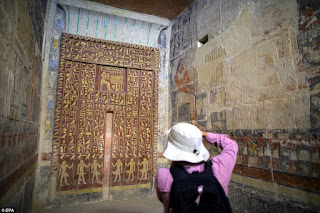 The tombs of Mehu have been reopened to the viewing public for the first time in almost 80 years since it was discovered in 1940 in Giza, Egypt.

Mehu's tombs, which are situated in the vast ancient burial ground of Saqqara, are deemed to be the most beautiful tombs at the site.

The magnificent burial site was restored by the Egyptian Ministry of Antiques, who reinstated the tomb paintings pictured on the walls of the chambers. 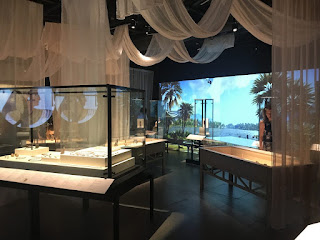 Meeting the “Queens of Egypt” in Montréal
The exhibition space imagining the royal harem beside the river Nile (photo: Nile Scribes)

Having opened in early April at Pointe-à-Callière in Montréal, Canada, the new exhibition Reines d’Égypte (Queens of Egypt) invites visitors on a tour of the east and west banks of the Nile during the New Kingdom. The Nile Scribes were able to visit Pointe-à-Callière this summer and see this special exhibition for ourselves. Including objects from temple, palace, and harem contexts on the east bank, the exhibition also featured objects associated with preparing for the afterlife on the west bank.


Papyrus of Aaner, priest of the goddess Mut, Third Intermediate Period (1076 – 722 a.C.) Click this link to watch the video. 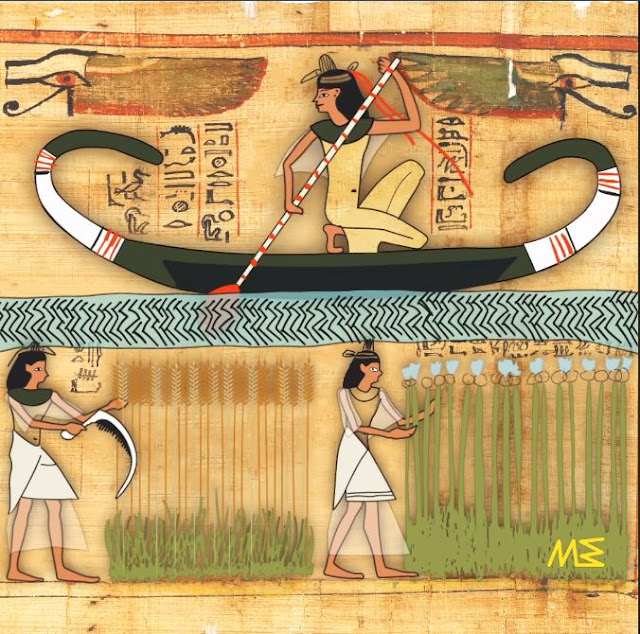 Posted by Michalea at 9:06 AM No comments: 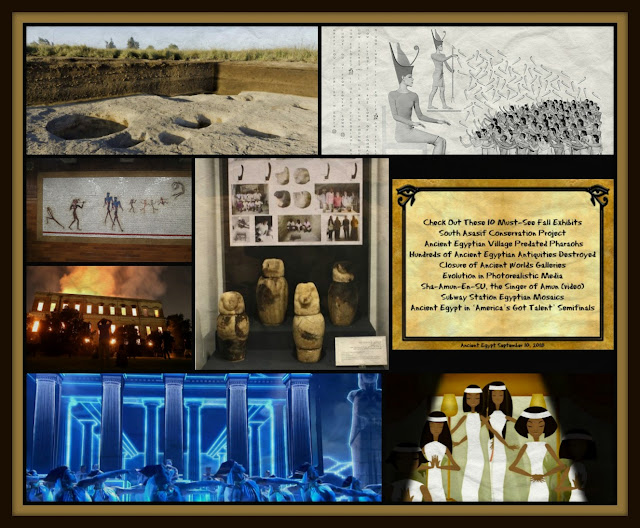 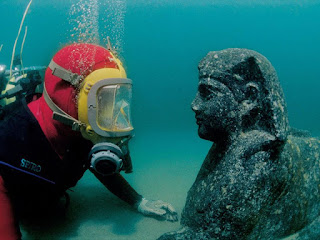 Get out and make fall a season of learning across the United States. These 10 museums will teach you, among other things, about the history of Victorian dolls, the gravity of Bill Traylor’s art and the mysteries of ancient Egypt.

In November, Egypt’s Sunken Cities moves from St. Louis to Minneapolis. This exhibit is fantastic! For a preview, see the photos I took in St. Louis. 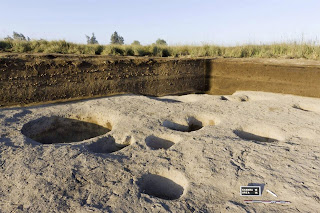 The Antiquities Ministry said the Neolithic site was discovered in Tell el-Samara, about 87 miles north of Cairo.

An Ancient Egyptian Village Just Found in The Nile Delta Predates The Pyramids by 2500 Years - ScienceAlert
Ancient Egypt: Land Before Pharaohs Revealed in Village Two Thousand Years Older Than Giza ... - Newsweek
Incredible Ancient Egyptian village unearthed that was lived in 2500 years BEFORE the pyramids ... - The Sun 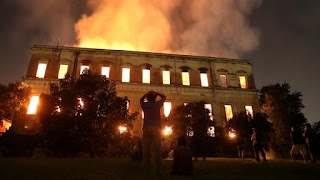 A devastating fire broke out on Sunday evening in Brazil and destroyed the 200-year old National Museum in Rio de Janeiro, which houses important artefacts from Egypt and is the oldest scientific institution in the country.

The cause of the blaze is still unknown, and no injuries have been reported. 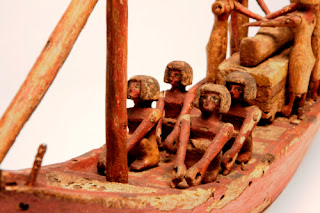 Manchester Museum, part of the University of Manchester, will be taking its much loved objects on tour over the next three years as the museum undergoes an exciting £13 million transformation, hello future. The museum will be building a new two-storey extension, which includes a partnership South Asia gallery with The British Museum, Chinese Culture gallery, Special Exhibitions Hall a new entrance and shop, making it more inclusive, imaginative and relevant to the diverse communities it serves. 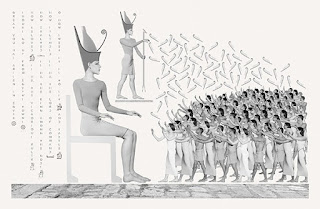 An international team of more than 50 specialists was involved in the creation of "Yesterday - Tomorrow", among them 13 Egyptologists from institutions such as Brown University, Harvard University, the Sorbonne, University of British Columbia and American University in Cairo.

The link has a short video. Here are some photos from the exhibit. 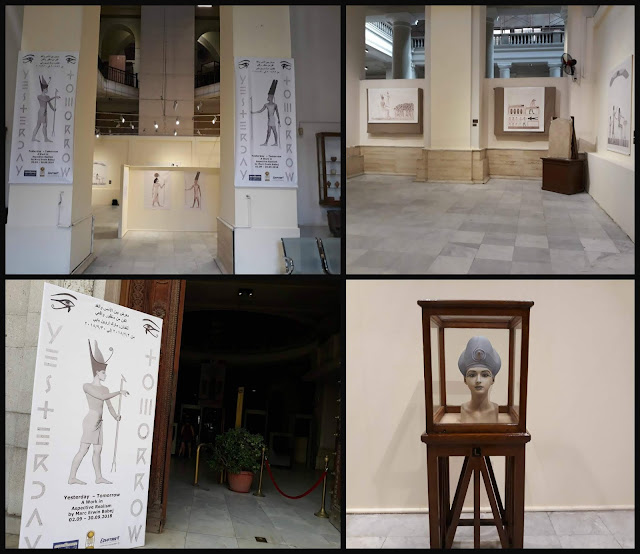 Sha-Amun-En-SU, the singer of amun from the National Museum

A brief animation made by PUC / RJ Presents Sha-Amun-En-Su in life, the mummy that was part of Emperor D's collection. Pedro II.


Note: The mummy and coffin of Sha-Amun-En-Su were destroyed in the fire that levelled the National Museum of Brazil.

In 1876, when he visited Egypt, Dom Pedro ii gained a gift from the khedive (meaning "Sovereign" was the title equivalent to viceroy given to the pasha of Egypt during the Ottoman Empire) Ismail the skiff of lady sha-Amun - in-SU, richly worked. The Emperor kept him in his office until the proclamation of the republic in 1889, when the play went on to integrate the collection of the National Museum, remaining until today.


Picture of the Week

In New York city, at the Lincoln Center subway station, are mosaics by Nancy Spero with Egyptian figures. Thanks to Tamara Bower for posting this! 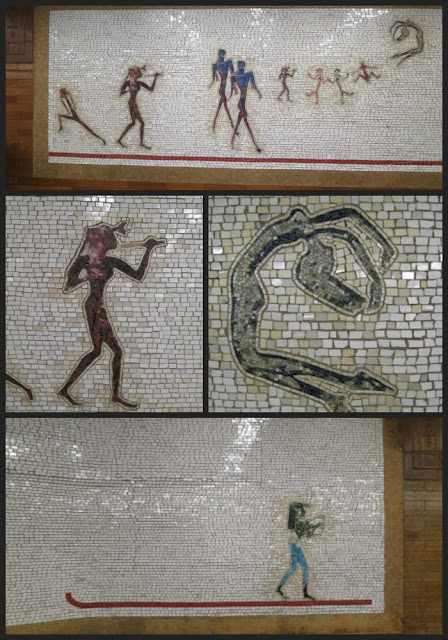 Posted by Michalea at 8:52 AM No comments: 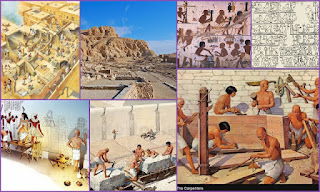 Labor Day is a holiday in the United States, and one most of us look forward to celebrating. (Who doesn't like a day off work?) This link is to a post I did for Labor Day 2015; to be perfectly honest, not that much changed in ancient Egyptian labor practices since2015.

THE B-LIST: Mystery, mysticism and mummies — uncovering adventure in the deserts of Egypt
Universal Studios

From Indiana Jones to Lara Croft, Nathan Drake to Captain Nemo, you've just got to love a good adventure built around a treasure hunter.

And while the lost Incan cities of Peruvian jungles, Mexico's fabled Fountain of Youth and mountainous Chinese ruins make for memorable settings, there's one place known for magic treasure that never fails to fire the imagination: Egypt. 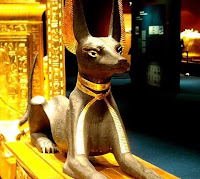 A tour in the Egyptian Museum would take its visitors to ancient Egypt. It is a time travel journey to decipher the symbols of the amazing monuments and to know the meaning of the most important archaeological pieces in the museum.

The Egyptian Museum has an extensive collection of ancient Egyptian antiquities. The museum was opened in 1902, during the reign of Khedive Abbas Helmy II in the heart of Cairo. 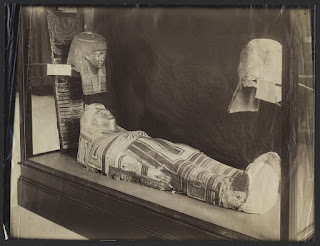 When Ariela Algaze signed up for a spring 2018 course on museums, she didn't expect to get wrapped up in the mystery of an ancient Egyptian mummy case that Jane Stanford herself purchased more than 100 years ago.

"I was just excited to learn how to put an exhibit display together," said Algaze, a Stanford art history sophomore. "But I became obsessed with finding out everything I could about this artifact."

A Female Figurine from Ancient Egypt

Countless figurines have been found in Egypt, from steatopygous figurines in the Predynastic to blue faience nude figurines, from paddle dolls to innumerable shabtis, statuettes designed to spring to life in the afterlife to work for their master in the Fields of Reeds. This particular figurine – E.6895 – predates the New Kingdom (c. 16th Century BCE) and is something of a curious find. The object comes from Garstang’s excavation at Abydos (1906-1909). The statuette features an elaborate headdress or wig, and is decorated with rounded impressions across the entirety of the figurine. These “punctures” are paralleled on other figurines from the Pharaonic Period. 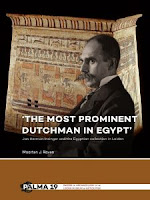 Every two months the Nile Scribes update our readers on the most recent Egyptological publications. From accessible reads to peer-reviewed scholarship, we hope to illustrate the wide variety of topics discussed in Egyptology, and perhaps introduce you to your next read! This summer has seen a vast array of topics addressed through new publications, ranging from astronomy and ceramics to imperialism and tomb robberies. Below are eleven new books that were released this summer (July and August 2018). 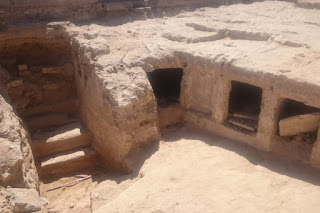 An Egyptian archaeological mission discovered a Ptolemaic necropolis in Alexandria’s western cemetery while carrying out a preliminary archaeological inspection before erecting an iron gate around a workshop at the Gabal Al-Zaytoun railway station in Alexandria. 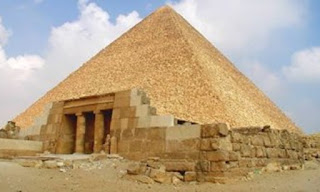 Head of Central Administration for the Restoration and Development of Monuments, Dr. Gharib Sonbol, stated that maintenance works in the pyramid of Khafre will be held after the Eid el-Adha vacation (Muslim celebrations).

The maintenance is carried periodically by the Ministry of Antiquities in an effort to protect the ancient Egyptian monuments.

Sitchin’s rocket in the tomb of Amenhotep-Huy

Painting of the west wall in the tomb of Huy by Charles K. Wilkinson (1920s),  Image © Metropolitan Museum of Art, New York.

If you had ever wondered how I came to be writing cranky blog posts debunking memes on the internet, and for that matter, critiquing old art history publications, it is a slightly organic process for me.  I often use the internet for research and I research Near Eastern iconography, which naturally now and then involves searching for images or publications.

After resolutely excluding Pinterest from searches I quite often also come across links to pseudo-science posts that make uninformed claims about ancient art.  Rather than have a complete meltdown, or shun the internet entirely, I write these responses.  It is surprisingly relaxing, my partner sorts stamps, I sort blog posts, in a manner of speaking. 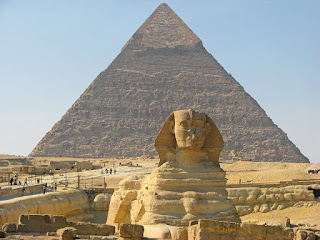 The Great Sphinx in Egypt is 800,000 years-old, according to a controversial new theory.

A pair of Ukrainian researchers say the mysterious structure is far older than the accepted claim that it was built during the reign of the Pharaoh Khafre between 2558–2532 BC.

Manichev Vjacheslav I. and Alexander G. Parkhomenko say evidence of water erosion at the monuments of the Giza Plateau shows the monument was partially flooded.


What really happened to the Library of Alexandria? - Elizabeth Cox 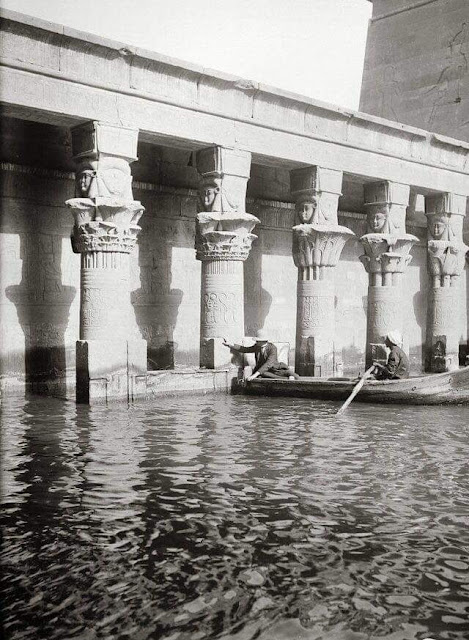 Posted by Michalea at 9:01 AM No comments: