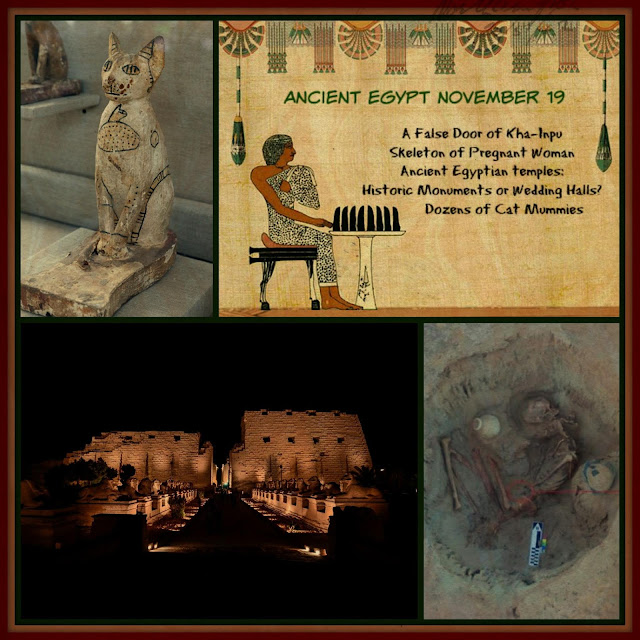 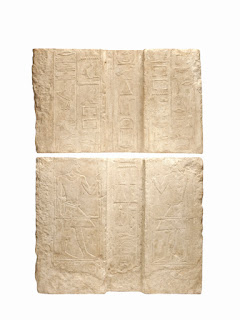 This pair of finely executed limestone reliefs comes from a larger false door emplacement. They entered the Manchester Museum from the collection of pharmaceutical baron Sir Henry Wellcome (1853-1936), whose vast numbers of objects apparently included material acquired from the collection of Victorian socialite Lady Meux (1847-1910) – including the present object. Pieces from the same tomb chapel are now in the Field Museum of Chicago and the Louvre. When first identified in the Wellcome collection, the limestone was marred by salt encrustations. Fortunately it has now been conserved. 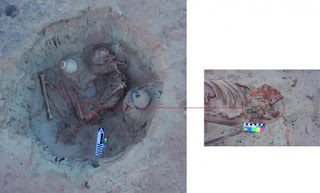 Archaeologists have uncovered the ancient remains of a woman who died towards the end of her pregnancy, Egypt’s Supreme Council of Antiquities reported on Facebook.

Scientists also found beads made from the shells of ostrich eggs, as well as pottery and jars in the tomb thought to date back some 3,500 years.

Preliminary examinations of the woman’s pelvis revealed the woman—thought to be about 25—may have suffered a fracture that ultimately killed her when improperly treated. The position of the fetus in her body suggested she had been due to give birth relatively soon. 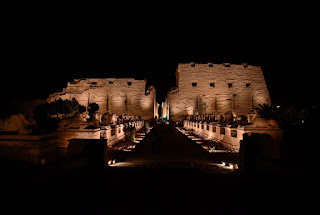 In October, two wedding parties were held at two of Egypt’s most renowned ancient landmarks, the Karnak Temple Complex in Luxor and the Philae Temple in Aswan, both UNESCO world heritage sites. The two parties stirred much controversy among residents of both cities and on social media and triggered a wave of contradictory official statements while the question of how detrimental such actions are to the country’s most valued sites remained hanging. 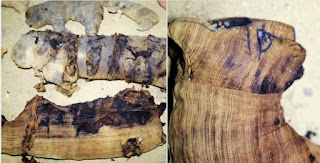 Ancient Egyptians were serious cat people, if a discovery in a tomb near Cairo is any indication.

On Saturday, Egypt’s Ministry of Antiquities announced that a team of archaeologists had uncovered dozens of mummified cats, along with 100 wooden cat statues and a bronze bust of Bastet, the ancient Egyptian goddess of cats. The artifacts, found in a tomb in a cemetery in what would have been the ancient city of Memphis, are about 6,000 years old. 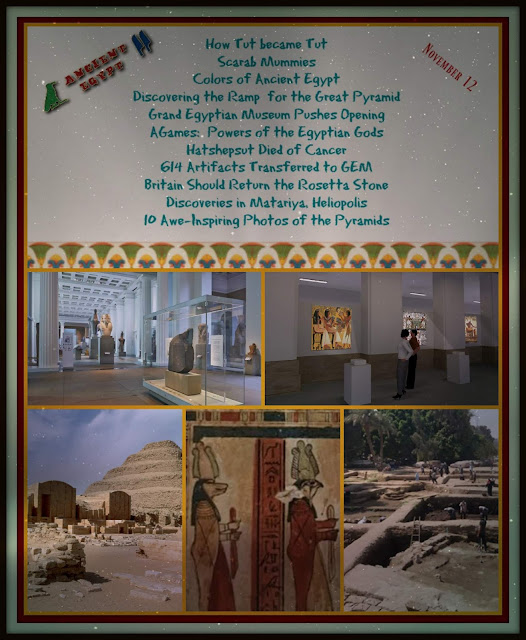 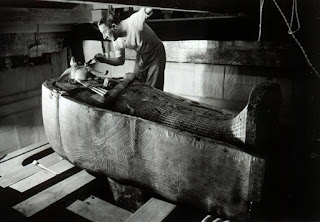 High tech has made ours an era of ubiquitous images — they flash on our phones, computer screens, and TVs, transmitted from around the world with the tap of a finger or the press of a button.

But in the early 20th century, the newspaper was the visual information superhighway, and the pictures displayed in London papers in January 1923 exposed the world to long-unseen wonders. 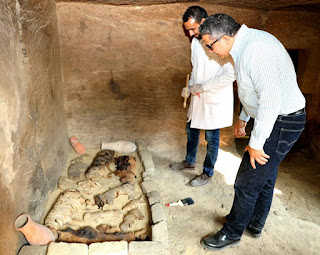 First ever mummies of scarabs were unearthed in the Memphite necropolis and much more !

Minister of Antiquities Dr. Khaled El-Enany announced today a new discovery made by an Egyptian archaeological mission during excavation work carried out since April until now at the area located on the stony edge of King Userkaf pyramid complex in Saqqara Necropolis. 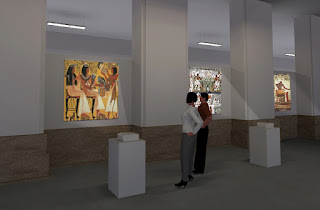 The Colors of Ancient Egypt

“The Colors of Ancient Egypt” is a new media exhibition that brings ancient Egyptian art back to life through the so called “Image-Mapping” technique, in the famous Egyptian Museum in Cairo. We recolor reliefs by projecting light onto the ancient artworks to make them appear the way they used to look like. Some of the oldest pieces of art merge with new media technology to transfigure the present into the past.
Visitors from all over the world are experiencing a historically authentic exhibition and get connected to the first highly advanced civilizatio 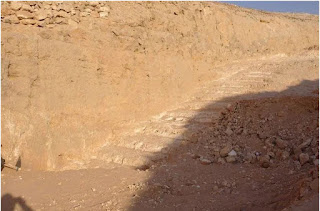 How I Discovered the Ramp that Might Have Been Used to Build Giza’s Great Pyramid
A joint archaeological mission to the ancient quarry site of Hatnub recently revealed the existence of this well-preserved haulage ramp dating to the time of the Great Pyramid, roughly 4,500 years ago. ROLAND ENMARCH

What at began as an expedition to record the inscriptions of ancient Egyptian quarry workers produced a remarkable discovery about the Great Pyramid at Giza. My colleagues and I in the Anglo-French joint archaeological mission to the ancient quarry site of Hatnub recently revealed the existence of a well-preserved haulage ramp dating to the time of the Great Pyramid, roughly 4,500 years ago. 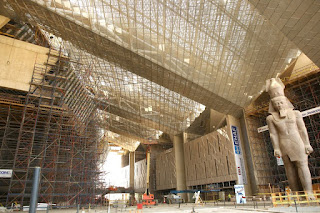 The opening of the long-delayed Grand Egyptian Museum (GEM) near the Pyramids of Giza has slid again, to 2020. As recently as June, officials said the museum would open partially in 2019 for the unveiling of its star attraction—all 5,400 objects from the tomb of King Tutankhamun. The full opening was expected to follow in 2022, the centenary of Howard Carter’s discovery of the boy pharaoh’s tomb. 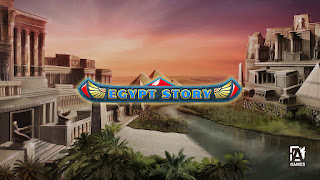 AGames Awakes the Powers of the Egyptian Gods

Can you recollect your favorite film inspired by the history of Ancient Egypt? The brave hero walks through the desert to find the lost city. He crawls across the caves full of dangerous traps and, finally, finds the cursed treasure.

Imagine a game where  Anubis, Osiris, Horus, Isis and the other powerful Egyptian Gods are there to help? AGames are pleased to reveal the Egypt Story, a new game we are proud to have developed. 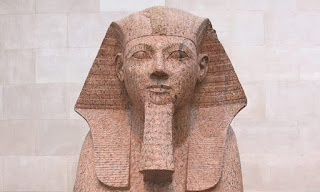 Thousands of years after her death, scientists revealed that ancient Egyptian female pharaoh Hatshepsut died of cancer at the age of 50, according to Hussein Abdel Basser, director of Antiquities Museum of Bibliotheca Alexandria.

The statement came during a lecture held on Monday at the Bibliotheca, entitled ‘Pharaohs’ Queens: The Drama of Love and Power.’ 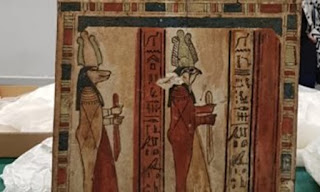 The transferred collection comprises 11 objects from the treasures of King Tutankhamun, with the king’s diadem among them.

The transferred artifacts date back to the Old Kingdom and the Late Period. The artifacts include King Amenhotep II’s wooden box covered with a layer of white mortar and engraved with the king's cartridge and a hieratic text; a group of Osirian statuettes; a limestone statue of Senefer, the fifth dynasty’s top official; and a 26th dynasty relief bearing the image of a sphinx. 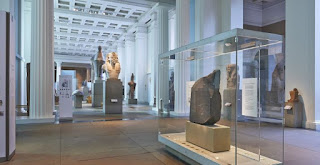 Britain should return the Rosetta Stone to Egypt and replace it with a virtual reality replica, says new head of Giza museum

'It would be great to have the Rosetta Stone back in Egypt but this is something that will still need a lot of discussion and co-operation,' Dr Tawfik, the director general of the Grand Egyptian Museum, told the Evening Standard. 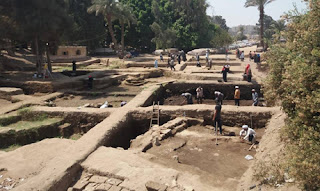 One of the inscriptions credits the creator God Atum as being responsible for the flood of the Nile, likely dating to the Late Period (664-332 BC).

A German-Egyptian archaeological mission working in Matariya, ancient Heliopolis, has uncovered a number of inscribed stone fragments from the 12th and 20th dynasties and the Third Intermediate Period of Ancient Egypt.

10 Awe-Inspiring Photos of the Ancient Pyramids of Egypt

From the early step pyramids to the towering Great Pyramids of Giza, the tombs are among the few surviving wonders of the ancient world.

The Egyptian pyramids are some of the most incredible man-made structures in history. More than 4,000 years after their construction, the pyramids still stand as some of the most important and mysterious tombs in the world. Their
Posted by Michalea at 8:56 AM No comments: 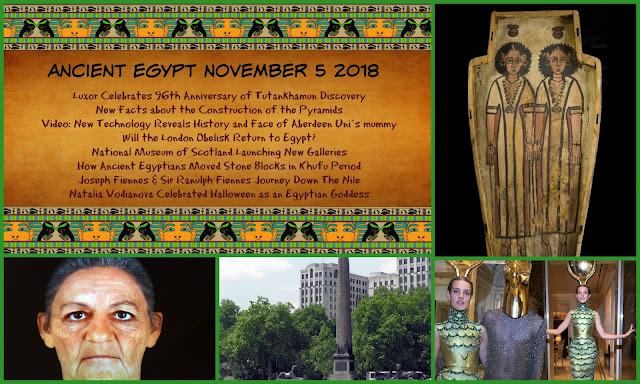 The governorate of Luxor, starting from Sunday, November 4 until the end of the month, is celebrating the 96th anniversary for the discovery of Tutankhamun’s tomb.

The government celebrates November 4 as the national day of Luxor.

New Facts about the Construction of the Pyramids

Scientists have discovered a special 4500-year-old system to extract and move huge stones in an ancient quarry in the Eastern desert of Egypt on the territory of Hatnub – reports Live Science.

The device is well-crafted slope surface with steps at the edges and numerous holes in the soil. These holes appeared on the wooden poles that were fixed mounts. Around them around the bundles. The ends were tied to a special sled, to which was attached a rock. Workers pulled the harness, and the unit is gradually raised.

Academics have used X-rays to visualise an Ancient Egyptian mummy that has been part of an Aberdeen university collection for more than 200 years. 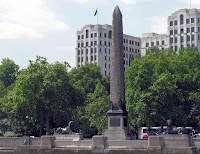 Will the London Obelisk Return to Egypt?

We need to take a stand on the condition of Egyptian antiquities abroad.

I traveled to London in October, to participate in the American University of Cairo’s fundraising campaign to help students who were financially-disadvantaged, yet gifted. I decided to take a taxi to Times Square, to see the Egyptian obelisk there.

The National Museum of Scotland -- the most-visited attraction in the UK outside of London -- has announced the opening date for three new galleries dedicated to East Asia, Ancient Egypt and ceramics.

Set for February 8, 2019, the opening of the galleries 100 days from now will mark the completion of a 15-year transformation of the National Museum of Scotland that has involved restoring the Victorian building and displaying more of its holdings.

A French-British archaeological mission from the French Institute for Oriental Archaeology and the UK's Liverpool University have discovered ancient engravings alabaster quarries in Tel El-Amarna that could help reveal how ancient Egyptians managed to move stone blocks from alabaster quarries during the Khufu period.

The Handmaid’s Tale and Shakespeare in Love star is teaming with the explorer, who is his cousin, in Fiennes: Return to the Nile. The pair will journey down the river in Egypt to re-visit the locations that Ranulph explored on his first expedition 50 years ago.

Suited for holiday, Vodianova chose a very original wearing a green dress to the floor and decorating his head with the accessory in the form of a Golden bowl shaped like a throne, she appeared in the form of the Egyptian goddess ISIS. (The name ISIS translates as “throne”.)

Posted by Michalea at 7:58 AM No comments: