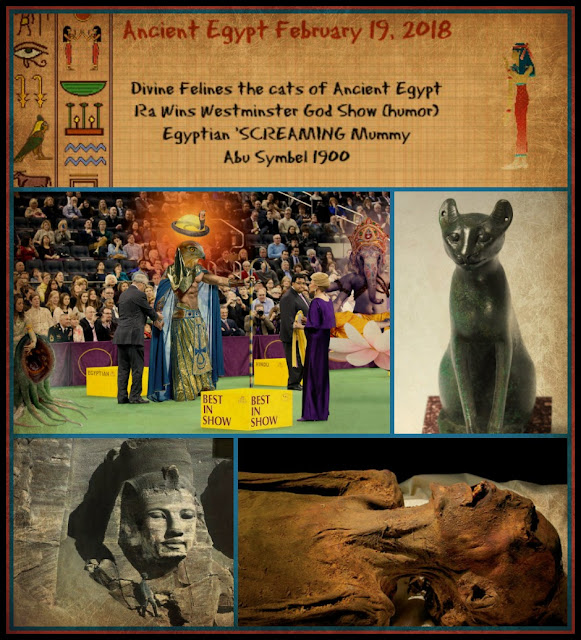 As any cat lover can tell you, felines are divine.

Ancient Egyptians took that notion even more seriously than pet owners of today, and a charming new exhibition at the Carlos Museum through November 11 offers a fascinating glimpse at the unusual status occupied by cats in the ancient world. It’s a small but superb show that explores feline themes in ancient Egyptian art. Organized by the Brooklyn Museum, and drawn from the collections of both the Brooklyn Museum and the Carlos Museum, the exhibition features more than 90 artifacts — sculptures, textiles, luxury items and funerary objects — dating from the Middle Kingdom to the Roman period.

During the field school organised by the Ministry of Antiquities at the site of Kom Rasras in Kom Ombo,Aswan, a group of archaeologists discovered the remains of a sandstone Roman temple according to Dr. Ayman Ashmawy (Head of Egyptian Antiquities sector).

Experts studying the so-called "Screaming Mummy" have long tried to solve the mystery of the terrifying remains.

Now they believe that he was either buried alive or poisoned.

When the body was first dug up from their Deir El Bahri valley, near the historic Valley of The Kings, archaeologists were stunned to see the mummified face distorted in a silent scream. 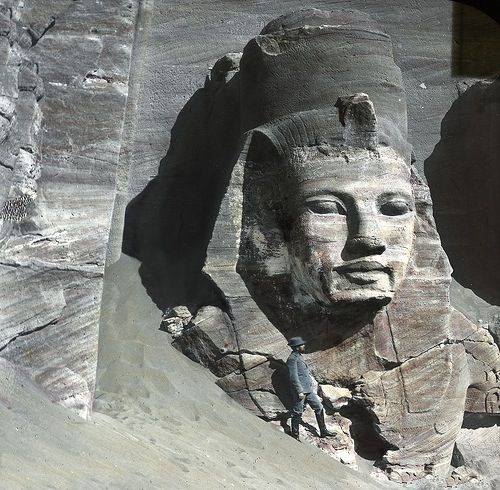 Posted by Michalea at 8:34 AM No comments: 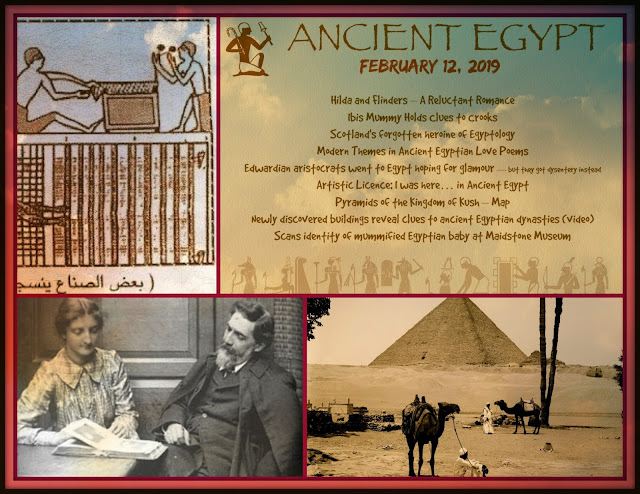 HILDA AND FLINDERS – A RELUCTANT ROMANCE

With Valentine’s Day just around the corner, today’s post takes a look behind the scenes, delving into the archives to tell the story of an unlikely couple, whose tireless work shaped Manchester Museum’s Egyptology collection, and proving that you can find love in the most unexpected places … and that sometimes, opposites really do attract!

The Kunsthistorisches Museum in Vienna has discovered an ancient Egyptian scroll hidden inside a vessel containing a mummified ibis. In the lengthy text, which are business notes, the scribe names three men he accuses of theft. It dates from around 1100BC. 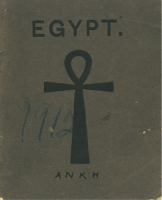 Women in Victorian and Edwardian times made a considerable contribution to British Egyptology. The accolades and academic positions, however, were dominated by men. It was a time when female emancipation was the largest domestic issue in Britain and the politics of most Egyptologists in Britain still mirrored the anti-suffrage views of the majority of contemporary society. Although the contributions to the subject by a few women of this period have received the credit they rightfully deserve, most still remain unsung heroines.

All You Need Is Love: Modern Themes in Ancient Egyptian Love Poems
The site of Deir el-Medina; its unusual location has led to a very good rate of preservation(photograph by Kingtut, distributed under a CC A-SA 3.0 license).

It is easy to get distracted by the largest and most obvious material from ancient Egypt – vast tombs, colossal statues and beautiful jewellery. This can lead to a disconnect in our understanding of what ancient Egyptian life was really like – how ‘normal’ people felt, behaved, and acted. One of the ways that scholars try to connect with ancient Egypt at a personal, individual level is through the translation and understanding of literature written by ancient Egyptians themselves; and on Valentine’s Day, what better way is there to do that than to read some ancient Egyptian love poetry?

Edwardian aristocrats went to Egypt hoping for glamour — but they got dysentery instead
The Great Pyramid of Cheops at Giza, 1910 CREDIT: BUYENLARGE
Was Egypt the first place ever to have been mourned by the seasoned traveller as “ruined”? At the close of the 1900s, a leisured clergyman and Oxford Professor of Assyriology called the Rev Archibald Sayce, who had spent the previous 18 winters cruising the Nile, sold his beloved “dahabiya” – a kind of houseboat, later incarnations of which will be familiar from Agatha Christie’s Death on the Nile – and left Egypt, as “life on the Nile had ceased to be the ideal existence it once was... The smoke of the steamer [had usurped] the sights and scents of the fields”.

Artistic Licence: I was here… in Ancient Egypt
Hieroglyphic graffito of the scribe Ashakhet in the Ptah temple at Karnak. Photograph: CNRS-CFEETK/Pauline Batard

But not many people realise that scrawling on walls isn’t anything new. At least three thousand years ago, in the dusty heat of Ancient Egyptian temples, people did the very same thing.

Pyramids of the Kingdom of Kush – Map


The Kingdom of Kush was an ancient African kingdom located in Nubia, a region along the Nile rivers encompassing the areas between what is today central Sudan and southern Egypt.

The region was home to three periods of Kushite development through antiquity. The first had its capital based at Kerma (2600–1520 BCE) which was Nubia’s first centralised state with an indigenous form of architecture and burial customs.

The archaeological excavation of an ancient Egyptian city at Tell Edfu in southern Egypt, led by the Oriental Institute of the University of Chicago, has discovered well-preserved settlement remains dating to an important turning point in ancient Egyptian history, when the pharaohs began to renew interest in the provincial regions in the far south of their kingdom.

Scans are to shed more light on the identity of a mummified Egyptian baby – one of the youngest ever discovered – which for centuries was believed to be the remains of a bird.

The rare relic, part of the collection at Maidstone Museum, underwent more tests after it was found to be the body of a miscarried foetus, and not a 2,300-year-old hawk as originally thought.

A picture showing some workers weaving linen from the Egyptian Textile Museum. 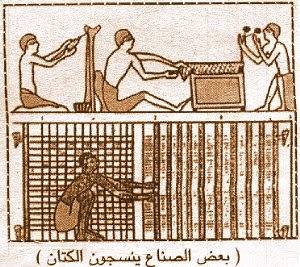 Posted by Michalea at 7:24 AM No comments: 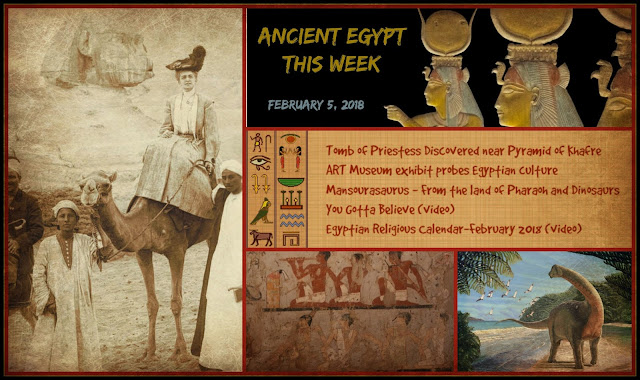 After almost 109 years of searching, the tomb of Hathor’s priest Hetpet has been uncovered.

“It is the first discovery to be announced in 2018,” said Minister of Antiquities Khaled El-Enany at a press conference held at the step of Hetpet’s tomb in Giza's western cemetery.

ART Museum exhibit probes Egyptian culture
Florence Scott Libbey (1863-1938) on a camel in Egypt in 1906. She traveled with her husband, Edward Drummond Libbey, the founder of Libbey Glass Company and the Toledo Museum of Art.

A fascination with ancient Egyptian culture took Toledo Museum of Art founders Edward Drummond and Florence Scott Libbey on travels to Egypt three times: in 1906, 1922, and in 1924.

During their travels, they stayed with other wealthy tourists at the popular Shepheard’s Hotel in downtown Cairo, and purchased antiquities and objects of curiosity from nearby antiques dealer Ralph Blanchard to bring back to northwest Ohio and their newly founded museum. 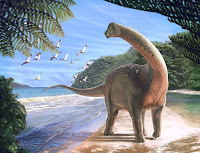 The story of the Mansourasaurus discovery began in December of 2013, when I received an invitation to give a talk about vertebrate paleontology at New Valley University in Kharga Oasis in southern Egypt.


Before the bling of Tutankhamun
The overlooked period known as the Middle Kingdom was really Ancient Egypt’s golden age, says John Romer.

If you read the first volume of John Romer’s A History of Egypt, which traces events along the Nile from prehistory to the pyramid age, you will understand why he thinks Egyptology is not a science. It is hard, perhaps impossible, to be exact about anything when most of your knowledge is based on deduction and when new discoveries can overturn accepted theories.

You Gotta Believe from Nina Paley on Vimeo.

Posted by Michalea at 7:32 AM No comments: