My name, Michalea Moore, from the Hieroglyphic Typewriter.

The Petrie Museum Facebook page called Discovering Ancient Egypt one of their favorite websites. I can see why. In addition to the just-for-fun typewriter, you can find more information about hieroglyphics, pyramids, temples, mummies, and kings and queens.  It also includes some general interest videos as well as  building famous temples in 3D. If  you don't want to miss anything, you can sign up for a newsletter.

Ancient Egyptians feared and worshipped Sobek, Lord of the Crocodiles. They kept crocodiles in their sacred lakes and sometimes decorated them with jewels, no doubt to entice Sobek's minions not to eat them while they were out on the Nile. The strength and speed of the crocodile was thought to be symbolic of the power of the Pharaoh, and the word "sovereign" was written with the hieroglyph of a crocodile. It was thought that Sobek could protect the Pharaoh from dark magic.

Sobek is often associated with Isis and Horus. Some myths suggest that he might have been present at the birth of Horus and helped Isis find the dismembered parts of Osiris. Other myths, undoubtedly playing on the fear factor, align him with Set, the god of Chaos. Some even go so far as to suggest that Set fathered Sobek.

With such a juicy background, I decided Sobek had an interesting role to play in Queen of Heka. He is a companion of Heru (Horus) and suffers from his unrequited love of Iset (Isis), which has some fatal consequences. In this excerpt, Sobek "woos" Iset.

Iset tucked the hem of her skirt into her sash and waded into the sedge marsh, sinking to her ankles in mud. The river lapped at her knees, making the sun’s steady drizzle of heat almost bearable. Spikes of yellow-green flowers swayed in the sporadic breeze and released the rich, heady scent prized by perfumers. Filling a basket with sedge, she paid little attention to her dog until a sharp bark trailed into growls, then whimpers. An enormous crocodile lumbered from a thicket. The dog, hackles rising, stood stiff-legged between them. She dropped the basket and pulled the dog by its scruff onto the riverbank.

“Sobek?” She held her breath, dreading the answer.

“Glorious Iset.” The creature, evolving with every step, confirmed her worst nightmare.  By the time Sobek reached her, he was fully man. He patted the dog’s head. It collapsed as if its
bones had melted.

“What did you do to my dog?” She ignored Sobek’s outstretched hand.

“It’s sleeping.” He grabbed her wrist and pulled her against him. He reeked of river water and something pungent and feral that overpowered the sweet sedge and singed her nostrils. His breath scalded her ear. “There’s an island near PaSabek where crocodiles come in the afternoon. Would you like to see it?”

Another shadow darkened the water. Nostrils and eyes emerged. The second crocodile’s indifferent gaze, pupils floating like black spears in a gold field, chilled her blood.

“I thought you might say that.” Rejection did not cool the heat in Sobek’s eyes.

She tugged her belt. The wet skirt plopped around her muddy ankles.

“I often see Light and Asar hunting out here.” Sobek’s thumb, cold and scaly, caressed her pulse. She shivered even though sweat beaded her forehead. “He handles a spear like a full grown man. Asar must be proud.”

Two crocodiles lumbered onto the bank. At least ten bobbed in the water. She licked her lips; her tongue was dry and parched.

“Asar adores him, and Heru worships his father.”

“No doubt, but what does that leave for you, darling Iset?” Sobek growled. The circling crocodiles, at least twenty by now, swung their heads toward him. “Your child no longer needs you, and your husband cannot be a man with you.”

“Poor Iset.” He stroked her cheek, his fingers incredibly cool against the heat that blossomed there.
Posted by Michalea at 7:53 AM No comments:

Finding Egypt. . . not in Egypt 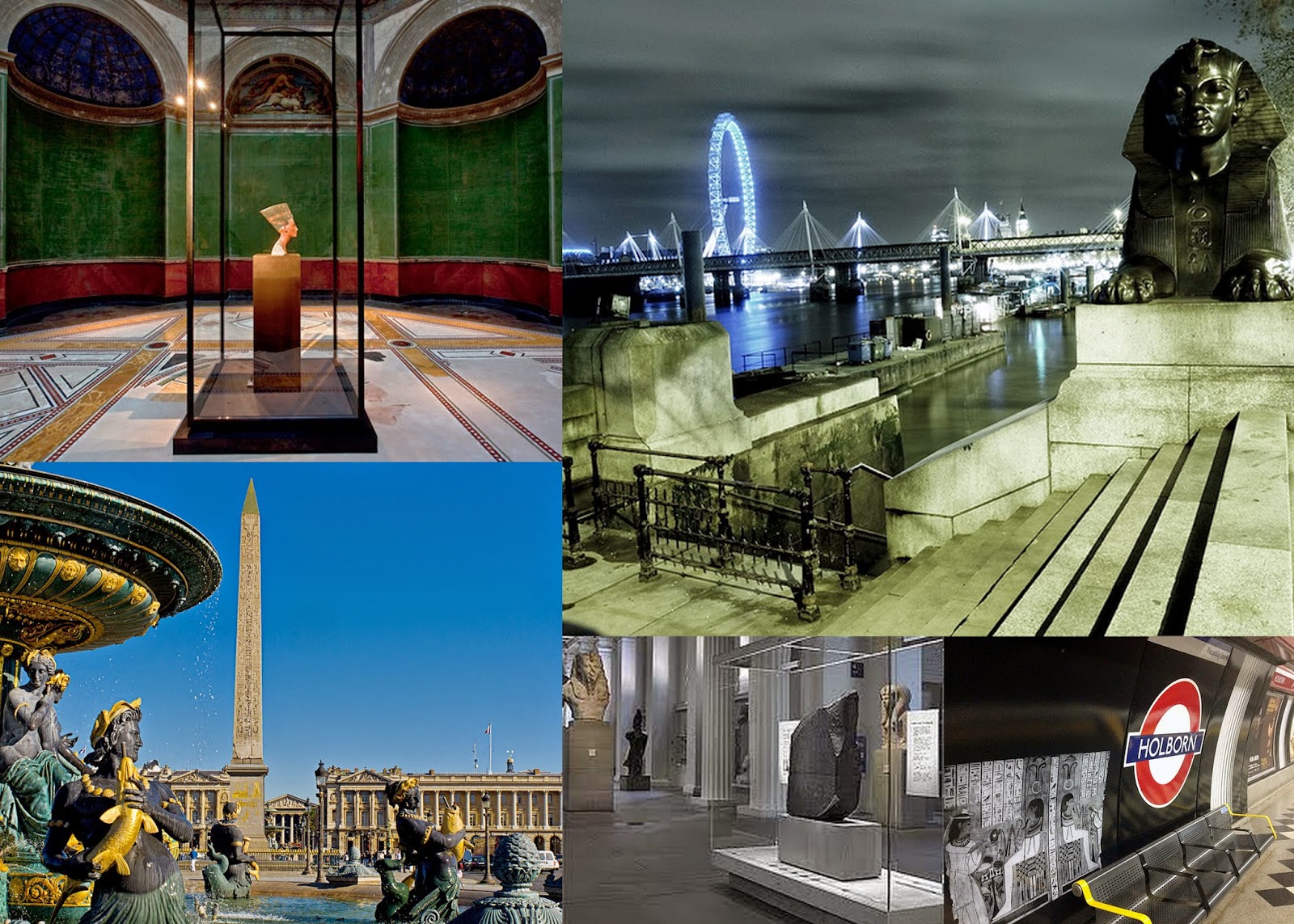 When we were in Egypt, my son and I had a running joke (that was really not at all funny) about plaques in front of statues, artifacts, and temples that said, "The original is in name that European museum." The British Museum and the Louvre were mentioned most often.

Just how much of ancient Egypt came to live in London? Well, the British Museum is the motherlode of Egyptian artifacts, including the Rosetta Stone and a really nice (and big) Book of the Coming Forth by Day (aka Book of the Dead). On one visit, I came directly from Egypt (where I presumably might have gotten my fill of Egyptian antiquities) to London, but I still spent half a day enjoying their collection. This article, Ancient Egypt in London, skims the surface of Egypt in other parts of London. There is no doubt the Brits love their Egyptomania. As do the French and the Germans.

Of course, the US has its share of Egyptian treasures. My first encounter with real Egyptian "stuff" was at the Field Museum in Chicago where I saw my first mummy at the tender age of 10. As an adult, my husband was on the board of the Illinois Arts Council; they arranged a private, after hours tour of the 1976 Tutankhamun exhibition in the Field Museum. Thanks to the Field Museum, I had a goal in life: Get myself to Egypt. And I did. Twice. I hope to go again. 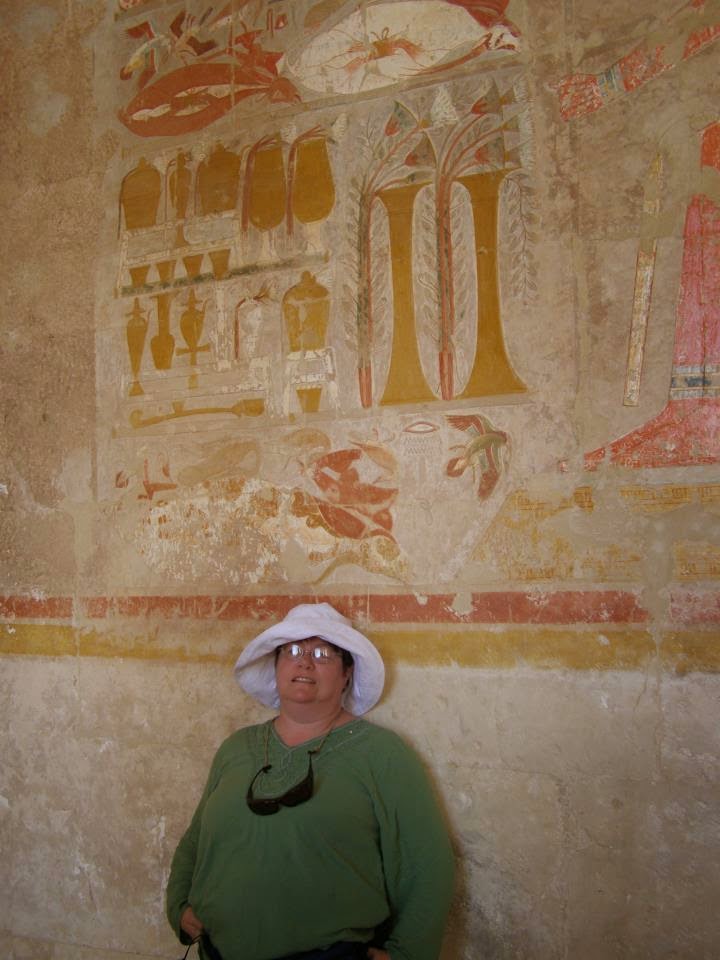 For a glimpse of the Egyptian joy you can find at the Field Museum, may I suggest An Egyptian Tomb and the Winds of the Afterlife: Chicago’s Field Museum.  Looking for Egypt near you? Check out this list.

While fully sensitive to and more than a little embarrassed by other countries amassing Egypt's treasures, I confess I am always excited when I encounter Egypt outside of Egypt. It's a confirmation that without that great and grand society that lasted (depending on your definition of when it ended) between 2500 to 4100 years, civilization as we know it simply would not exist.


July 9 update: Lest you think stealing antiquities is some19th Century phenomenon, Gleaming in the Dust, an audio documentary, reports on what has happened to Egyptian antiquities since the 2011 revolution.
Posted by Michalea at 7:27 PM No comments: