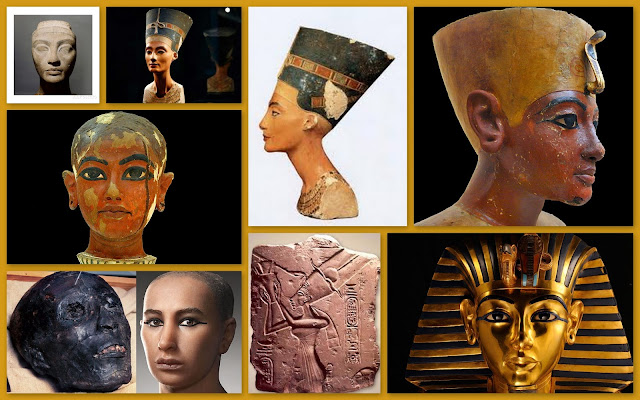 After all the speculation and the radar scan, we're "pretty sure" something is there, and it might be big.  The scans will now be sent to Japan for further analysis - which could take up to a month. However, even the most minor of incisions in the wall could wreak damage to an inner chamber that may have been hermetically sealed for so many years. . . not to mention the part of the walls we can see have priceless paintings.

As Nicholas Reeves, the archaelogist who started all this, said, “The key is to excavate slowly and carefully and record well. The fact is this isn’t a race. All archaeology is disruption. We can’t go back and re-do it, so we have to do it well in the first place,” Reeves said.

So, it looks like a lot of waiting is on the horizon. In the meantime, catch up on all the news.

Speculation is mounting that Tutankhamun’s tomb could lead the way to the last resting place of the lost Queen Nefertiti, in what would be the most remarkable Egyptian archaeological find this century.

King Tutankhamun: Officials '90% sure' there is a secret chamber ancient Egyptian tombSome theories suggest Queen Nefertiti may have been Tutankhamun's mother. However, Antiques Ministry Damaty believes the chamber may contain the body of Kiya, a wife of the pharoah Akhenaten.

They know something is there; they just don't know how big it is. That's the latest from Egyptian officials who are trying to determine whether Queen Nefertiti's tomb might be hidden behind King Tutankhamun's tomb.

I am enchanted by Nefertiti: Nicholas Reeves

In an interview with Al-Masry al-Youm a few hours before the announcement of the radar examination results at Tutankhamun’s tomb in search for Nefertiti’s tomb, British Egyptologist Nicholas Reeves said he would not apologize if his theory was proven wrong.

“Archaeology is based on assumptions that could be right or wrong,” he said, adding that it would take a long time to complete his work. “But we do have indications

Search for Nefertiti in Tutankhamun's tomb to start Thursday
The three-day operation will involve the use of non-invasive radar to search behind the walls of Tutankhamun's burial chamber. ‎

Cairo (AFP) - Egypt said Monday it will conduct more tests this week in search of a hidden chamber in King Tutankhamun's tomb that a British archaeologist believes may be the burial place of Queen Nefertiti.

King Tut: The Teen Whose Death Rocked Egypt
Famous for his tomb full of golden treasures, the boy pharaoh was a pivotal figure in shaping the future of Egypt.

TUTANKHAMUN’S striking gold funeral mask: It’s the ancient world’s most beautiful object. But was it actually made for a woman? Evidence its name-stamp was doctored suggests so.

What is missing from the tomb of Tutankhamun?

The world of archaeology is holding its breath. Will radar results confirm recent claims that there may be more to the tomb of Tutankhamun (KV 62) than it’s discoverer Howard Carter, and most Egyptologists since, believed?

Posted by Michalea at 7:31 AM No comments: 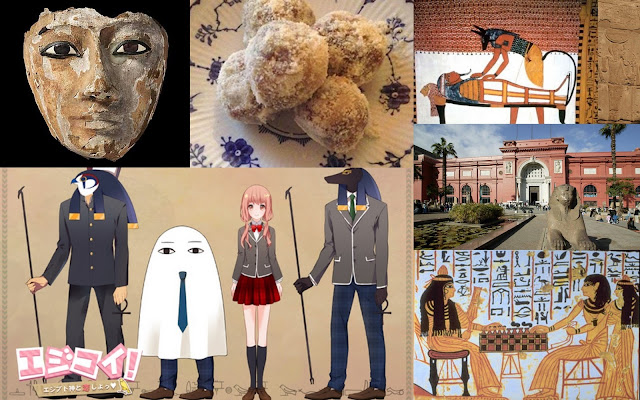 The dating simulator scene is getting weirder and weirder, so it’s hard to be surprised by anything they come up with these days. Humans are already old news and we’re now used to romancing all manner of strange creatures. Even so, this mobile game for girls caught my eye with its unique character designs and by promising love with powerful ancient Egyptian deities. 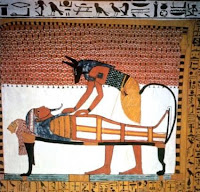 How did Ancient Egyptians mummify a body?
Egypt’s undertakers employed different mummification methods at different times. Here are details of the classic method, as used on Tutankhamun.

Mummies are a common topic on this blog. In other mummy news, here are a couple of my favorites:

My mummies: first, last, and in-between

In every issue of BBC History Magazine, picture editor Sam Nott brings you a recipe from the past. In this article, Sam recreates a healthy snack thought to have been enjoyed in Egypt around 3,500 years ago.

In an early draft of my novel, one of my characters ate these. Maybe I should bring them back.

Play the ancient game of the Pharaohs for free

Board games were a favorite pastime in Egypt, and Senet was the most popular of these. It was played by two people, either on elaborate carved and inlayed boards like the one found in Tutankhamen’s tomb, or simply scratched into the earth. The oldest known representation of Senet is in a painting from the tomb of Hesy, from 2686 BC. Get yours now.

I'm not upset over the color of Egyptian skin; I don't engage in that particular argument, because everybody is WRONG. There's empirical evidence they were green and blue. 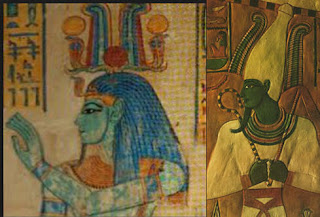 But seriously, couldn't they do better than this? I had such hopes, and now they're dashed.

More on this film

Lying in the heart of Egypt’s capital at Cairo’s famed Tahrir Square, the Egyptian Museum has been fascinating and astonishing the world with its treasured collections for more than a century.

The museum marked its 113th year of existence on Monday with a celebratory ceremony that welcomed visitors, public figures and antiquities officials including Antiquities Minister Mamdouh El-Damaty with flowers, musical performances and free guided tours.

Who wouldn't love this beautiful and haunting face? 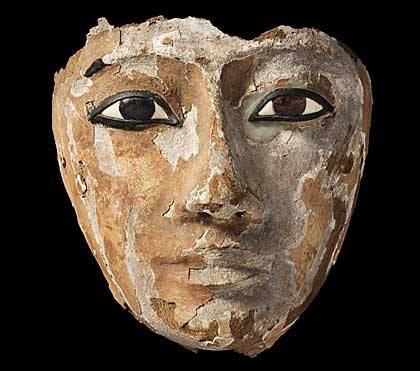 The Lock of Hair s3mt and the Childhood of the Deceased in Ancient Egypt.

The Coffin Texts mention a final shape of hair also with a deep symbolic meaning. It is the lock of hair s3mt. About the meaning of s3mt there are different opinions. According to A. Erman and H. Grapow s3mt means “sadness” [1]; A. Gardiner translates it as “mourning” [2] and for R.O. Faulkner its meaning is “lock of hair” [3]. We will treat that later and we will notice that all translations result in the same idea

Posted by Michalea at 7:40 AM No comments: 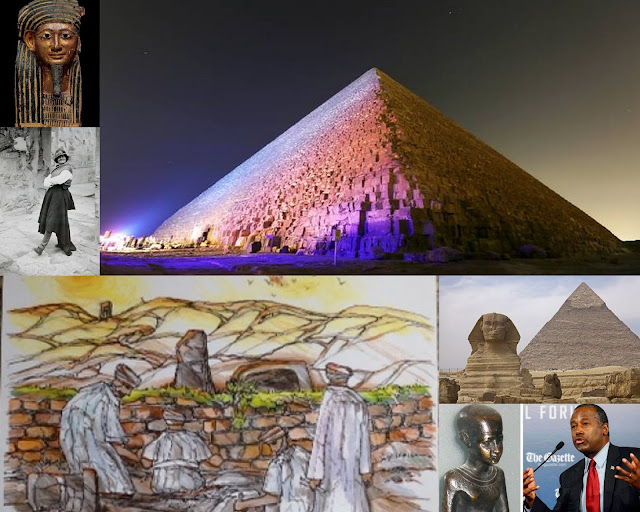 A retired Regina architect recently returned from a month of documenting archaeology in Egypt. David Butt went with some archaeologist friends to a 5,000-year-old city. They dug up layer after layer of civilizations that lived at the site.

Egypt to Ben Carson: no, the pyramids were not for storing grain
Antiquities minister says presidential hopeful’s claim doesn’t deserve response, while another official points out that ‘this man is not an archaeologist.’

If that isn't enough, Ancient Egyptians wrote the reason behind the Pyramids.

Amice Calverley — who lived in Oakville — is pictured in Egypt during one of her many expeditions.nextplay/pausepre1/2


Over her lifetime, the late Amice Calverley worked as an artist, nurse, musician and art collector.

The Oakvillian’s artefacts, artwork and music have had a permanent home at Joshua Creek Heritage Art Centre, founded by her niece Sybil Rampen. 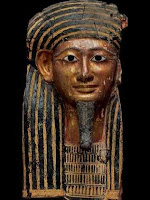 Amenhotep's Book of the Dead: Afterlife in Brisbane

An ancient Egyptian boy's blackened foot, minus one toe, sawn roughly from his leg at the ankle, is a macabre relic of a time with tomb robbers, magic spells, scraps of papyrus. Learn how a 3400-year-old mystery was solved in eureka moment in Brisbane.
Scanning the Pyramids.

The scans revealed anomalies including empty areas in the pyramids, which could be internal air currents or different building materials

No, Imhotep and Joseph Were Not One and the Same
Ben Carson says he thinks Joseph built the pyramids, but the Egyptian records and experts say it was Imhotep, who, no, is not Joseph.
read more: http://www.haaretz.com/jewish/archaeology/1.685420

Posted by Michalea at 7:35 AM No comments:

Email ThisBlogThis!Share to TwitterShare to FacebookShare to Pinterest
Labels: ancient Egypt, Book of the Dead, Pyramids

Video of Isis, Osiris, and the Contendings of Horus and Seth 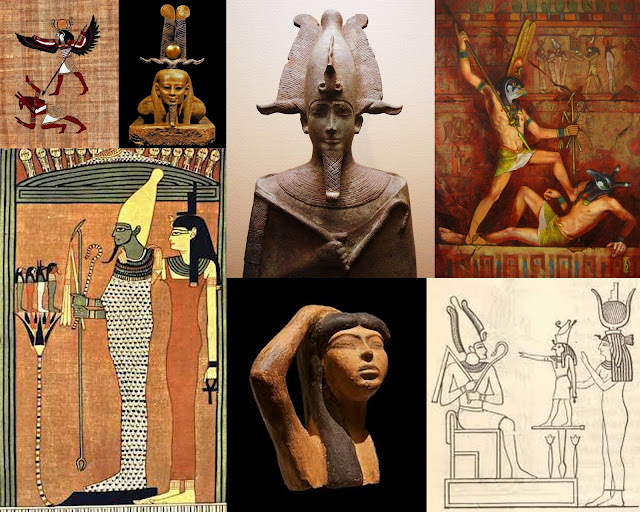 An interesting video that tries to explain a complicated stories. A few issues, but good fun.

Posted by Michalea at 7:57 AM No comments: