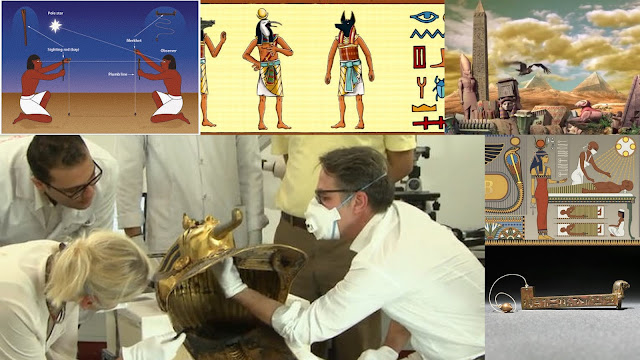 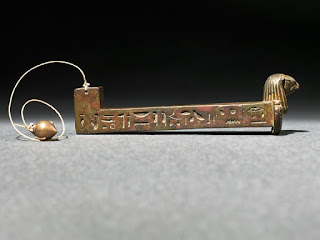 The merkhet or merjet ("instrument of knowing") was an ancient timekeeping instrument. It was used to track the alignment of certain stars, if they were visible, in order to approximate the time at night (10 stars for the 10 hours of the night, with a total of 24 hours including 12 hours for the day, 1 hour for sunset, 1 hour for sunrise). In this way, it was more efficient than other contemporary devices, such as sundials, which were rendered useless during the dark.

The exact design of the merkhet consists of a horizontal bar, usually carved from wood or bone, with a plumb line hanging from a transverse hole at one raised end of the bar, attached to a controlling wooden handle. As deduced by texts and engravings on the inner walls of the temples of Dendera and Edfu, the merkhet was typically used in conjunction with a corresponding sighting tool, which the Egyptians called a bay, made from a specially cut palm-rib with a sliced "V" shape at one end. The two together could also be used, as appropriate, to determine North. 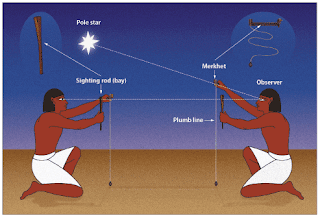 For the operation to work, two merkhets were required, one aligned with Polaris, the North Pole star. If erected properly, and if a bay was on hand, one could estimate quite accurately the time by observing the transits of certain stars as they crossed the meridian and came into alignment with the two merkhets.

A few merkhets have been excavated and preserved, including one that is on exhibition in the Science Museum in London. This particular exhibit dates to 600 BC, and, according to a related inscription, belonged to the son of a priest who hailed from a temple dedicated to the Egyptian god Horus, located close to Edfu in Upper Egypt 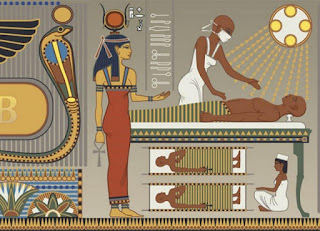 What would their art look like if Ancient Egyptians lived today? This is a quirky little exhibit, and my favorite is obviously Isis resurrecting Osiris. To see more, click here.

Posted by Michalea at 7:41 AM No comments: 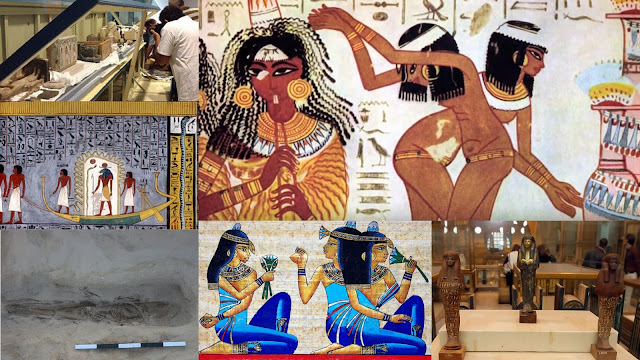 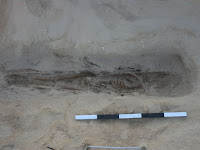 An ancient wall carving spells out the bloody punishment for stealing animal hides: 100 lashes and five wounds. Egyptologists have long wondered whether that was a literal description.

Now skeletons showing evidence of that sentence have been found in a humble cemetery in the ancient Egyptian capital of Amarna.

Egypt's Ministry of Antiquities wil open a small museum in the transit hall at Cairo International Airport's Terminal 3 at the end of this month in an attempt to promote tourism.
Elham Salah, head of the Museums Section at the ministry, told Ahram.

Book of the Gates Video

The Book of Gates is an Ancient Egyptian funerary text dating from the New Kingdom.  It narrates the passage of a newly deceased soul into the next world, corresponding to the journey of the sun through the underworld during the hours of the night. The soul is required to pass through a series of 'gates' at different stages in the journey. Each gate is associated with a different diety and requires that the deceased recognise the particular character of that deity. The text implies that some people will pass through unharmed, but that others will suffer torment in a lake of fire.

The idea of enhancing female sexual arousal is centuries-old. The mandrake was believed to be a love-charm in ancient Egypt. In The Mandrake And The Ancient World, Harrison wrote that it released a "piercing demoniacal shriek which was supposed by the ancients to accompany the uprooting of the plant". Mandrake root was eaten as an aphrodisiac and as a cure for female infertility because the forked root was supposed to resemble a woman's thighs.

The blue lotus was called Viagra of the pharaohs and used to enhance the sex drive.

Posted by Michalea at 7:59 AM No comments: 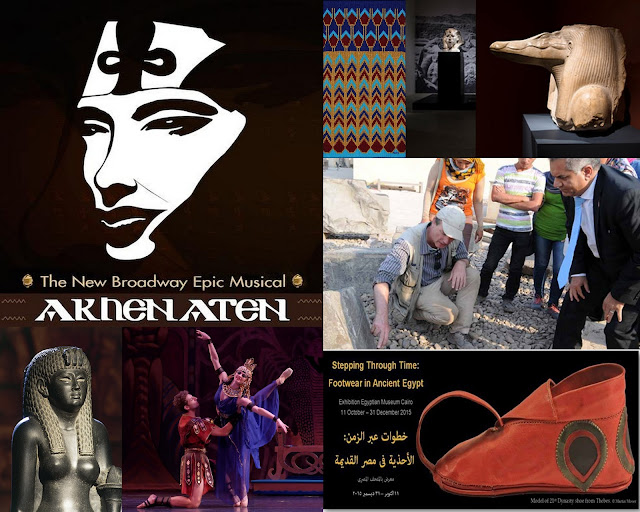 While we're all excited to see what's in Tut's tomb, I'm taking a break from ALL NEFERTITI, ALL THE TIME. I'm also seeing a visit to New York in my future! 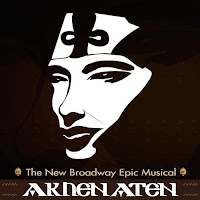 Akhenaten the Musical
If you're getting all psyched up about Nefertiti's tomb maybe being located in Tut's tomb, and Armana is your gig, I have a Broadway show for you!

Pop-opera-soul diva N'Kenge (Motown: The Musical, Sondheim on Sondheim) will be starring along with Seph Stanek and Tony LePage in the Broadway-bound musical production AKHENATEN: THE MUSICAL, set for a concert at The Metropolitan Museum of Art's Temple of Dendur, 1000 5th Avenue, New York NY, on Tuesday, October 13, 2015 at 6 p.m.

The musical tells the story of the pharaoh AKHENATEN, his wife NEFERTITI and his son King TUT, and centers on how AKHENATEN challenged the almighty power of the priests of Ancient Egypt by imposing a single god over their many gods.

Ancient Egypt is box office gold: Do a show, and people will come. Why? Mummies, Hollywood and Queen Nefertiti certainly contribute to its allure. Also, we tend to identify with Egyptians of thousands of years ago. In art, they look exotic, but not out of reach. They drank beer, collected cats, and wore flip-flops. They yearned to stay young and to live forever, with loved ones nearby and snack food piled high. Who can’t relate to that?

Few institutions have done a better job at illuminating that art than the Metropolitan Museum. And it returns to the subject in “Ancient Egypt Transformed: The Middle Kingdom,” an exhibition notably low on King Tut bling and high on complex beauty.

Blocks of King Nakhtanebu I’s shrine were unearthed during excavation works carried out by an Egyptian-German archaeological mission in the area known in ancient times as Oun city, now Ain Shams
Minister of Antiquities Mamdouh Eldamaty told Ahram Online that the mission also uncovered small limestone blocks of a number of columns and the ceiling of the temple of 30th Dynasty King Nakhtanebu I. The ceiling is decorated with stars.Coos Art Museum shows 'Egyptian Memories'

Beautiful reproductions of the woven designs found in Tut's clothing will be exhibited in the Oregon debut of Egyptian Memories — weavings by textile artist and art historian Nancy Arthur Hoskins. Previously exhibited at Vanderbilt University, "Egyptian Memories" will be on display at Coos Art Museum from Oct. 9-Dec. 5. 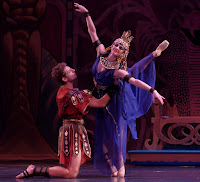 Ancient Egypt and its queen come to life in ‘Cleopatra’

Staging “Cleopatra” gave Ballet Nebraska choreographer Erika Overturff the chance to learn about ancient Egypt — the citizens, the gods, the clothes, the art.
As she researched the famed Egyptian queen, Overturff discovered a beautiful and tragic love story that is rich with history — it has more than enough drama to make a great ballet, she said.

The female 'kings' of ancient Egypt

Cleopatra the Great has become virtually synonymous with the term ‘female pharaoh’. Yet, as Joann Fletcher reveals, Mark Antony’s famous wife was merely the culmination of three millennia of women rulers.

An exhibition on ancient Egyptian footwear is to open Sunday evening at the Egyptian Museum in Tahrir under the title "Stepping Through Time: Footwear in Ancient Egypt".

Posted by Michalea at 7:08 AM No comments:

My mummies: first, last, and in-between 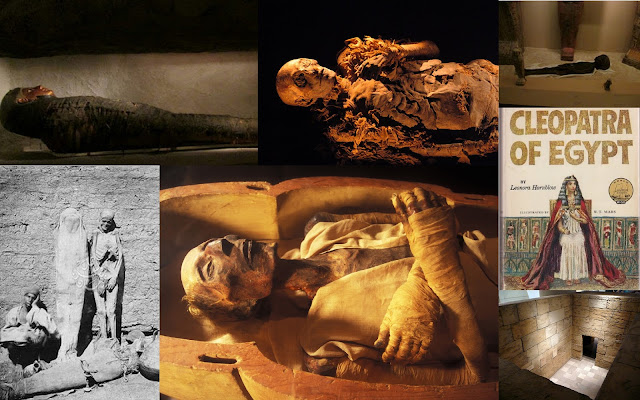 So, as I have said many times and places, my childhood home away from home was the Quincy Public Library, which looked like a castle; the children's reading room was in a tower. I was the Queen of Reading.

I checked out three particular books so often the librarian called my mother; they reached an agreement: Michalea can check out these books once a month. She cannot renew them. What were the three books? Great Queens of History, Cleopatra of Egypt, and a book of mythology. Right then and there, I was hooked on Egypt. At the time, I didn't know Cleopatra wasn't a REAL Egyptian.

During my formative years, my Egyptian and mummy experiences were limited. I kept a spiral notebook of clippings and sayings about Egypt. One notable entry was a bit of dialog from the old Dick Van Dyke show where Dick played Mark Antony and Mary Tyler Moore played Cleopatra at the community theater of New Rochelle. It was all pretty mundane, but I was dedicated. 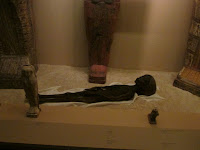 In my tenth year, that all changed. I spent the entire summer with my aunt in Chicago, who made it her mission in life to introduce me to museums and culture in general, but most specifically, the Field Museum. Deep in the basement of the Field Museum were the mummies. I'd heard about mummies, but seeing the small mummy of a child  (shown beside this paragraph) was profound experience for me. Of course, there were several other mummies at the museum, all mysterious and beautiful.

No doubt this picture from 1870 ofselling mummies in Luxor is how so many mummies came to be in the Field Museum. 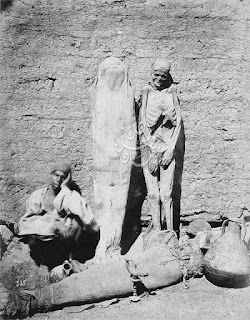 Seeing the mummies opened the door to questions about immortality and my place in the history of the world. It also was my first real introduction to Egypt beyond Cleopatra. On Fridays, my aunt let me choose where I wanted to go, and I visited the mummy section many, many times. It was the site of my first vow to visit Egypt.

Fast forward to 1977 when I, along with 1.3 million Americans saw the Treasures of Tutankamun in a touring exhibit in the US. Naturally, I saw it at the Field Museum, my old childhood stomping grounds. It was a special treat for me, because my husband served on the Illinois Arts Council, and I was able to go on an after hours visit with about 20 other people and an Egyptologist from the University of Chicago. The exhibit was set up to mimic a tomb, the lighting was shadowy and mysterious. It was marvelous, and afterwards I made my way to the basement to pay my respects to my childhood mummy and renew my vow to visit Egypt.

In 2006, I actually made it to Egypt, and one of  the places I visited was the Mummy Room at the Egyptian Museum in Cairo where I saw the mummy of Ramses the Great. It was thrilling, because I had followed the news of his visit to Paris, traveling on an Egyptian passport and receiving a 21-gun salute. 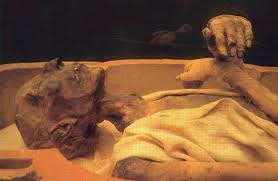 When I went back to Egypt, they had just discovered the mummy of Hatsheput, so I visited the Mummy Room again to see her before visiting her mortuary temple. 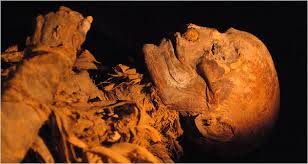 Since then, my life has been relatively mummy-free, unless you count research on the mummification of Osiris for my novel, Queen of Heka, until the Labor Day holiday here in the U.S. My daughter came to visit from Texas, and we took the train to Chicago for a couple of days of culture. We visited the Field Museum. 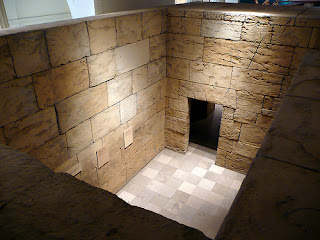 Since my first visit, the museum built a three-story recreation of a mastaba,  featuring two authentic rooms from the 5,000-year-old tomb of pharaoh’s son Unis-Ankh. You enter the top-level, and when you exit at the lower level, you are near the mummy exhibit, which in many ways, hasn't changed that much since I was 10. It was like meeting an old friend.

Posted by Michalea at 8:56 AM No comments: