Finding Osiris (and inspiration) at a thrift store in Austin, Tx

A friend and I were discussing how the universe sometimes offers "odd things," and how they can reaffirm what we're doing. She discovered her totem animal in one of those weird quirks of fate. I found this object in a thrift shop for twenty-five cents. I bought it because I like strange things. Seriously, I do. Here's another odd purchase: 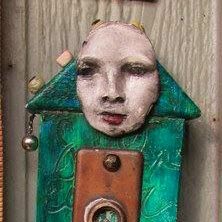 Do we see a pattern emerging? Yes,I think we do, but that's not my point.

As steeped as I am in all things Egyptian from writing my novel, I should have immediately glommed on to the fact that the first object is meant to be a representation of Osiris or maybe the trilogy of Isis, Osiris, and Horus.  Amazingly, it took me almost a year to have this sudden insight. (We're all slow sometimes.)

What did I base my insight on? In my humble opinion, this object has

So what do you think? Am I right? And who (besides me) might make an object like this?

Final note: Sometimes, when I'm stuck writing my novel, I look at this odd little piece for inspiration and can feel power emanating from it. Twenty-five cents? It's priceless.

Posted by Michalea at 8:35 PM No comments: