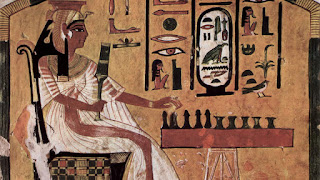 Is this the original board game of death?
THE YORCK PROJECT/WIKICOMMONS

Ancient Egyptians took their board games seriously. The backgammonlike senet started out as a mere pastime, but over nearly 2 millennia it evolved into a game with deep links to the afterlife, played on a board that represented the underworld. Now, a version of the game sitting in a California museum might reveal when this dramatic transformation took place.

Senet probably wasn’t the world’s first board game, but it was one of the first to become a smash hit. It seems to have risen to popularity in all tiers of Egyptian society about 5000 years ago—and was still being enjoyed by Egyptians 2500 years later. The Greek historian Herodotus is widely known as the “father of history”. His magisterial Histories, written in the 5th century BC, has provided modern scholars with a wealth of rich detail on the Greco-Persian wars and the Mediterranean society in which he lived.

However, Herodotus has also attracted the ire of his readers for the apparent errors and inventions that permeate his text. The Greek biographer Plutarch once famously described him as “malicious”, and said that those who hoped to detect “all his lies and fictions would have need of many books.” 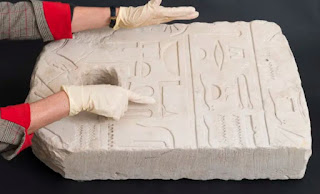 An 3,400-year-old inscribed Egyptian anchor uncovered in Israel is on display for the first time at the Israel Museum in Jerusalem, within the exhibition “Emoglyphs. Picture-Writing from Hieroglyphs to the Emoji.”
As reported by Haaretz, the artifact was spotted by chance by an Israeli veterinarian swimming off the shores of Atlit, south of Haifa.

“I saw it, kept on swimming for a few meters, then realized what I had seen and dived to touch it,” Rafi Bahalul told Haaretz. “It was like entering an Egyptian temple at the bottom of the Mediterranean.” 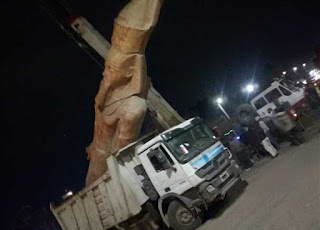 A Ramses II obelisk, parts of which were unearthed in Egypt last August, is set to be fully re-assembled and displayed in downtown Cairo’s busy Tahrir Square, after the foundation of the monument was successfully installed in the center of the well-known traffic circle.

The step came as part of the government efforts to revamp the iconic square and draw attention to Egypt’s rich ancient history, with Egypt’s Ministry of Antiquities having transported eight blocks of the statue unearthed in August 2019 at Zagazig, a city in Lower Egypt.