Ancient Egypt this week: A brief history of sedentary fragments

The 2,200-year-old mummy of an Egyptian man who spent a lot of time sitting and eating carbs went on display at the Israel Museum in Jerusalem on Tuesday and will be open to the public beginning Wednesday.

In the middle of June, there was an announcement from Egypt's Ministry of Antiquities about a box found in the basement of Cairo's Egyptian Museum. The contents included some 500 small gold sheets which may have come from the 1907 excavation of Valley of the Kings tomb KV55. In that controversial excavation, a royal coffin was found, unlike anything before that time. The coffin had been defaced with the owners names cut out. The box to be studied may hold these missing names inscribed on the gold sheets. The inscription which runs down the center of the coffins lid contained epithets which are unique to the Heretic Pharaoh Akhenaten. 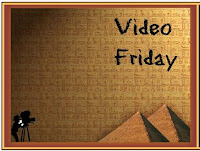 Video Friday
In case you didn't see it, I started a new feature last week. I receive links to a lot of videos, which I sometimes include in these posts. A lot of cool videos don't make it just for space reasons. So, I decided to devote every other Friday to a post that has the videos that enchanted me during the week. I'll try for a theme (like last week's Mummies), but I'm making no promises.

Ancient Egypt: A Brief History
Egyptian civilization has flourished continuously since prehistoric times. While the civilization's rulers, writing, natural climate, religion and borders have changed many times over the millennia, Egypt still exists as a modern-day country

A map of Egypt's archaeological sites to be launched

The Geographic Information System (GIS) at the Ministry of Antiquities has created an archaeological map locating all the archaeological sites and museums over Egypt.

The map is in both Arabic and English and will be provided to all archaeological sites and museums.

The following articles are from the British Museums Lost Cities exhibit.

The British Museum staged a major exhibition on two lost Egyptian cities and their recent rediscovery by archaeologists beneath the Mediterranean seabed. The BP exhibition is the Museum’s first large-scale exhibition of underwater discoveries. It shows how the exploration of Thonis-Heracleion and Canopus – submerged at the mouth of the River Nile for over a thousand years – is transforming our understanding of the relationship between ancient Egypt and the Greek world and the great importance of these ancient cities. 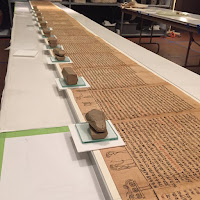 A New Life for the Book of the Dead

In preparation for the renovation of the Ptolemaic galleries of Egyptian art, riggers and technicians deinstalled one of the most-viewed objects at The Met, the Book of the Dead of the Priest of Horus, Imhotep, and its companion, Papyrus inscribed with six "Osiris Liturgies". The two scrolls are housed in eight framed sections, measuring around 100 feet in total length, in gallery 133. For the staff of the Department of Egyptian Art and myself, an associate paper conservator, this step represented the start of the second phase of the refurbishment of the scrolls' display.