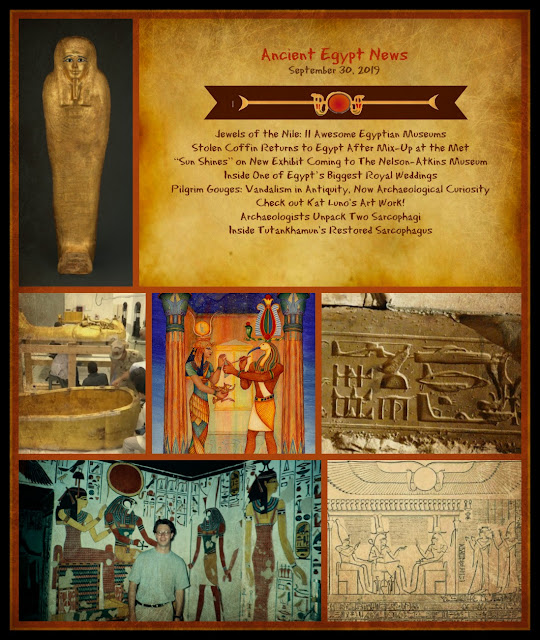 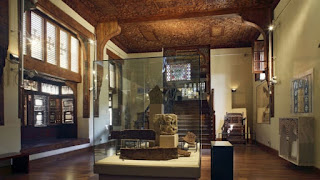 For much of the 20th century, the Egyptian Museum in the center of Cairo was the gold standard for collections along the Nile.
Mainly because among the many nuggets inside were the glimmering death mask of Tutankhamun and all the other relics discovered in the boy king's tomb by archeologist Howard Carter in 1922.
But Egypt has always had far more treasures than a single museum could display. 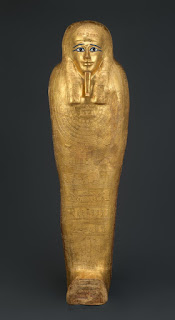 Stolen Coffin Returns to Egypt After Mix-Up at the Met
(Photo: Wikimedia Commons)

The coffin, believed to be crafted between 50 and 150 BC, was purchased by the Metropolitan Museum of Art two years ago — but was fooled by phony documentation. It appears to have been stolen from Egypt during the 2011 uprisings. NBC New York’s Gus Rosendale reports. 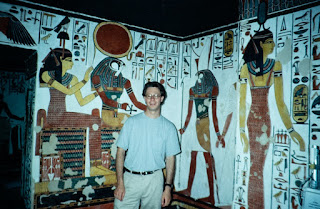 “Sun Shines” on New Exhibit Coming to The Nelson-Atkins Museum of Art
Julián Zugazagoitia in Queen Nefertari’s tomb, 1993. He curated the exhibit “Nefertari: Light of Egypt,” which in 1994 opened in Rome. (Courtesy | Julián Zugazagoitia)

The Nelson-Atkins Museum of Art has announced the “Queen Nefertari: Eternal Egypt” exhibition will be coming to Kansas City in November. The exhibition celebrates the mysterious queen and wife to Pharaoh Ramesses II, who referred to her as “The One For Whom The Sun Shines.”

The exhibit will not only focus on the queen herself, but also will feature the women of ancient Egypt. Emphasis will be put on royal life in palaces, everyday life of female artisans, and the strong underlying belief system of ancient Egypt. The exhibit is scheduled to run from Nov. 15 to March 29. 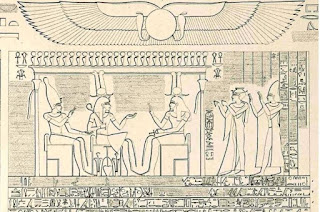 Inside One of Egypt’s Biggest Royal Weddings
The relief above the text shows Ramses II (left), enthroned, wearing the white crown of Upper Egypt. The gods Ptah (second from left) and Seth (seated at right) sit with him. Standing to the right is his bride, Queen Maathorneferure, and her father, King Hattusilis (far right), who did not accompany his daughter to Egypt.


When Ramses II married a Hittite princess, it strengthened the political alliance between the two former enemies. But the arrangements weren’t easy to make.

RAMSES II ENJOYED one of the longest reigns in Egyptian history. He spent more than 65 years on the throne during a period of military and cultural splendor which would win him the title Ramses the Great.

In 1249 B.C. Ramses II had been ruling for 30 years. To commemorate such a notable occasion, pharaohs held jubilee celebrations known as Heb Sed. Ramses chose his magnificent new capital city, Pi-Ramses, to stage a suitably lavish celebration for this milestone. 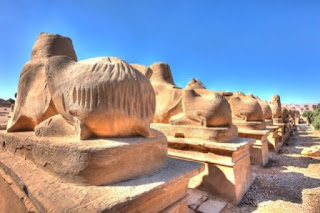 Pilgrim Gouges: Vandalism in Antiquity, Now Archaeological Curiosity
Pilgrim gouges on the buttocks of sphinxes on the Avenue of Sphinxes at Karnak. Photo by Cammyjams [Flickr].

When does vandalism become an archaeological feature? When it’s done in antiquity, of course.

In the featured image of this article above is a photo of a particular kind of vandalism commonly referred to as “pilgrim gouges.” I’ve noticed these peculiar scoops of stone in various photos of columns, ashlar blocks, monuments and so on, but never really stopped to think about what they were.

In hindsight, all the examples I can think of or locate on the net or in books, are within reach of people. Still, my first guesses included eroded palimpsests and some sort of vandalism in antiquity. 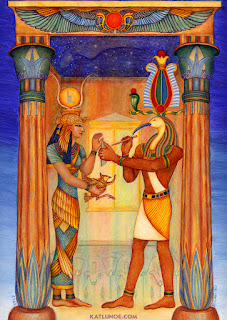 Kat is an oil painter & illustrator who loves working with color, symbolism, and portraiture. Her work is infused with a fascination for subjects such as world mythologies, psychology, science fiction & fantasy, as well as various mystical systems such as Tarot and Qabalah. Stylistically, she is influenced by a number of disparate artistic genres that all seem to coalesce into something cohesive in her mind. These include classical realism (particularly turn-of-the-century Russian realism), surrealism, visionary art, spiritual & religious iconography, as well as many kinds of illustration genres 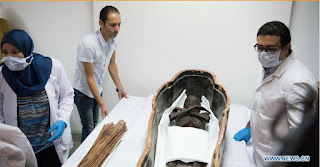 A sarcophagus with a mummy inside is seen in the National Museum of Egyptian Civilization (NMEC), Cairo, Egypt, on Sept. 21, 2019. Egyptian Minister of Antiquities Khaled al-Anany witnessed on Saturday the unpacking process of two ancient sarcophagi ahead of their restoration and display in a new museum. The mummies in the two sarcophagi belong to a senior official of the New Kingdom of Egypt, and his wife, said Mostafa Waziri, secretary-general of the Supreme Council of Antiquities. 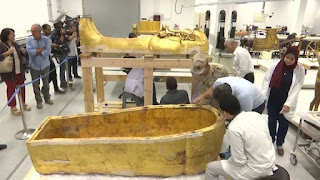 Inside Tutankhamun's Restored Sarcophagus, In A New Museum Exhibit
The Egyptian King's coffin was discovered in 1922. Photo: Associated Press

The golden coffin of the Egyptian Pharaoh Tutankhamun will be restored for the first time since its discovery, ahead of a new museum exhibit next year.
The three thousand year old Egyptian relic is in a fragile state and will require careful restoration before it goes on public display next year.

For more info, photos, and a video see